Staff on the first day on April 21, 1982 outside Tallaght Fire Station

THERE was a celebratory atmosphere in Tallaght Fire Station as firefighters past and present gathered to recreate a photo that was taken when the station first opened on April 21, 1982.

A team of eight firefighters and a station officer had their photo taken by The Echo when the station first opened, which, at the time, was a single appliance station.

Many of the men in the original photo returned to the station to celebrate the 40th anniversary of the station’s opening.

Four of the men in the original photo, Gerry Bolger, Willie Daffy, Johnny Riordan and Noel Monaghan, have since passed away, however their sons are serving firefighters with Dublin Fire Brigade and stood in for them in the photo taken last week.

Adrian Greville, who was part of the original crew when Tallaght Fire Station opened, told The Echo about his memories of being in the newly opened station.

“It was a very busy station,” he said. “But for the first week it was quiet. I remember there was a sunny afternoon that Sunday when we were outside playing handball and we saw a fire engine from Dolphin’s Barn going up the Belgard Road with lights and sirens.

“We just waved at them as they went by – Tara Street [DFB’s headquarters where calls are passed from] had forgotten about us, but that never happened again!”

Adrian had joined DFB just over a decade before he started working in Tallaght Fire Station, which he transferred to from Rathmines after a circular was sent around DFB about staffing the new station.

“The likes of myself, Willie Daffy and Noel Monaghan all lived in Tallaght,” he said. “We all applied a few months before it opened, when a notice went out for firefighters for the new station.

“It was a brand new station, and everything in it was new, even the pots and pans. We weren’t long getting used to the place.”

One of those 60 firefighters now based out of Tallaght Fire Station is Derek Riordan, whose father, Johnny Riordan, is one of the firefighters in the original photo taken at the station opening.

Johnny has sadly since passed away, however Derek will stand in for him in the photo – and it is Derek who spearheaded the plan to recreate that photo from 40 years ago.

“When I called the individual people and their families to recreate the photo, they were all very happy to take part – every one of them said yes,” Derek said. 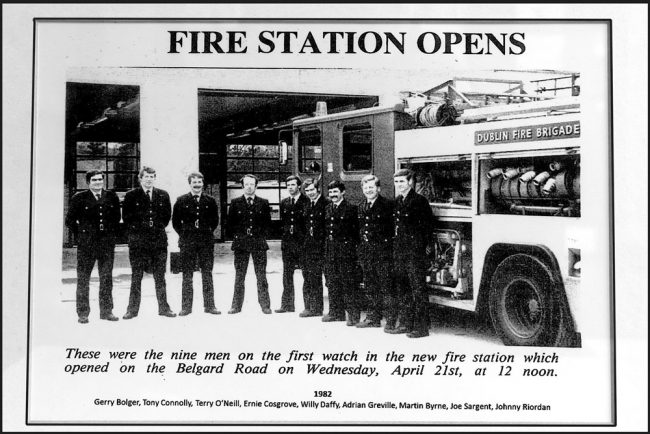 Staff on the first day on April 21, 1982 outside Tallaght Fire Station

Adrian added that the community that is served by Tallaght Fire Station, where his son David also served as a firefighter for 22 years before retiring in recent weeks, has continued to grow.

“It was completely different when it opened, because a good deal of Tallaght was just getting built at that time,” Adrian recalled.

“I left the station in the mid-80s, when I got promoted, but then I went back in 1996 as a station officer.

“It was still a one-pump station at that time, but the fire appliance and the ambulance were always extremely busy.

“I think the fire station had a great impact on the area, and because of the amount of calls they put a second appliance up there in 2001.”

Forty years after the station doors opened for the first time in 1982, and a photo of staff appeared in The Echo to mark the occasion, it has now come full circle.

“It’s nice to recreate something that’s 40 years old,” added Derek, “and for it to be published in The Echo on April 21, the exact date when the fire station opened in 1982.”