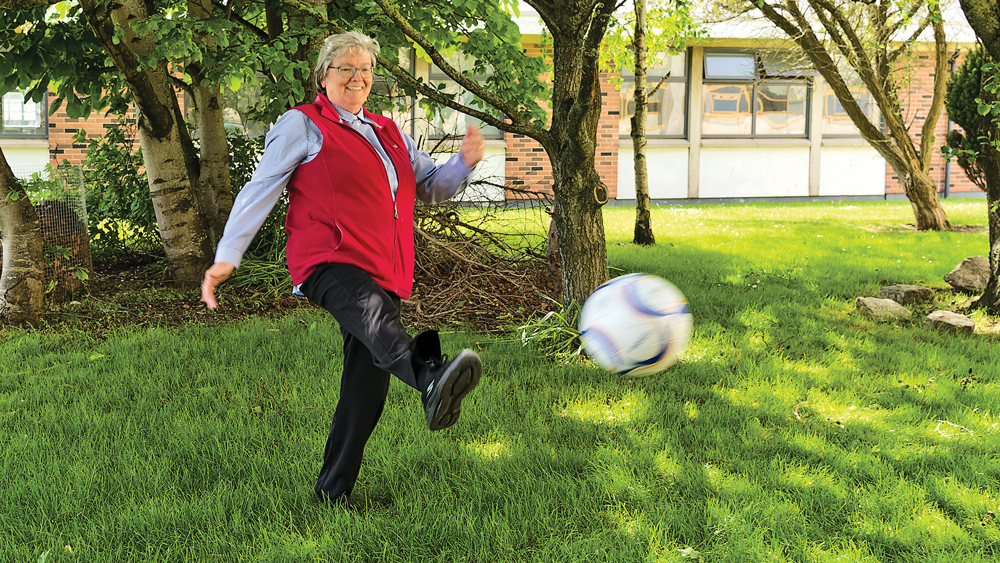 AGING is an inevitable part of living and ultimately, we’re all flying towards old age like a train on the tracks – if we’re not their already.

Some 19-years from now, 1.4 million people in Ireland will be over the age of 65 – which is one out of every four people.

Building an age friendly society to ensure that nobody – of any age, creed, race or background – gets left behind and in particular, that older people feel safe, secure and participatory in their community, simply can’t go amiss.

And, based on Census data from 2016, South Dublin has potential for substantial projected increases in the number of older persons – which creates challenges for the healthcare system, welfare services and general amenity.

There is plenty of opportunity to invest now, with targeted interventions directly into communities to tackle and address the needs of an ageing population.

For Sister Mary Lyons, who has been involved with the Older People’s Council in South Dublin for seven years and is the current chairperson, she wants to see the country continuing to work towards creating an age-friendly society. 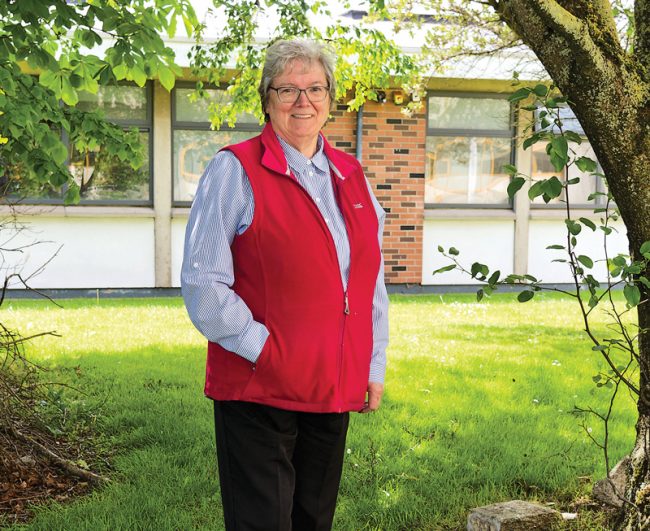 “What I’d like to see is parking facilities specifically for older people, just like what you would have for people with disabilities, or the family parking spaces,” Sr Lyons tells The Echo on the phone, just after scoring a goal in a football match at the St Paul’s Secondary School sportsday.

“I think what is important is that there are meetings, or some sort of awareness campaign, made around the enduring power of attorney.

“So what that means is that if you are not in the right frame of mind, maybe you could have dementia, and if you can’t make a decision, your son or daughter can for you. “But clearer information needs to be spread about it.

It is the same when it comes to forms, we need to have clearer instructions on forms – like your driver’s licence renewal forms.

“There is a general lack of transport and direct access to much-needed services, I feel like this needs to be addressed and lastly, broadband, particularly in the country, something needs to be done about that.” 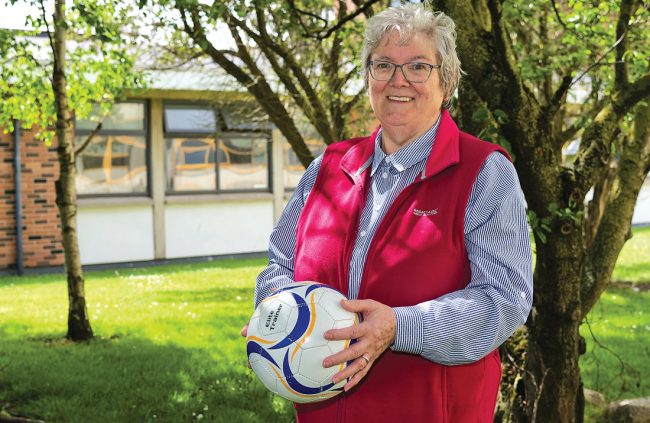 Born in 1947, young Mary Lyons grew up on a farm, the second youngest of eight children, with a joy for football and hurling, and loved education.

When asked about why she decided to join the congregation and pursue a faith-based life, sister Mary feels like she had a calling and that it was something she had to do.

Sister Mary remembers when St Paul’s Secondary School was built in Greenhills and she became an official teacher with the school in 1970, having completed a degree in Spanish and Irish in University College Dublin and her Higher Diploma in Education.

In the intervening years, Sister Mary lived in England for 12-years and set up three schools with the Sisters of St Paul in Romania between 2004 and 2008, before moving home to Greenhills. 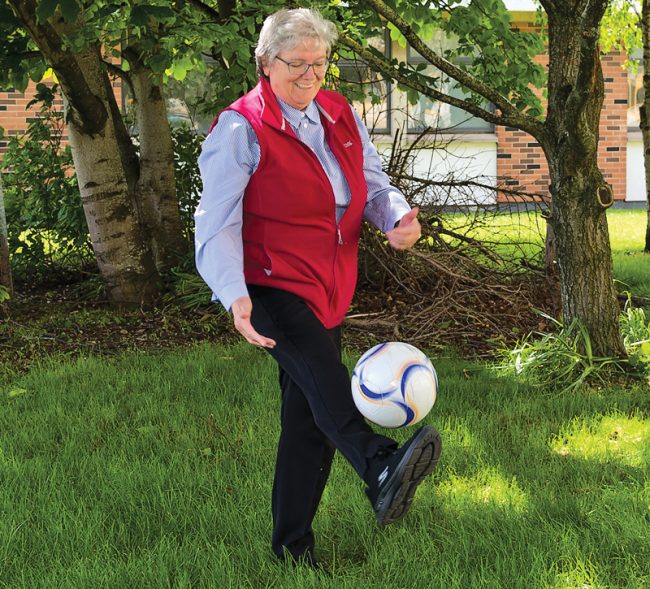 While Sr Mary has had some doubts over the years, it would be nearly impossible for her to lose faith after having an extraordinary encounter in 1972 following the death of her sister, Breda.

“You would always have the odd doubt, but I have great faith and I’ll tell you why,” Sr Mary elaborates.

“In 1972, my sister was killed in a car accident on Christmas Eve. It was traumatic.

“I remember, we had no car, and the priest in the parish actually drove me down to Limerick the next day to be with my family.

“I’ll never forget the terror and the dread walking down into the kitchen, wondering what I am going into here.

“There were these latches that were on old kitchen doors and I’ll never forget lifting my hand up to open the door.

“When I put my hand on the latch, the lord was standing beside me.

“It shook me, so much so that I physically had to take a step back.

“I knew everything was going to be okay. I went into the kitchen and my father just threw his arms around me and said ‘Mary, what is happening to us at all?’.

“I was almost on this high after the experience but I walked into this chaos in the kitchen.

“But that is very much so what the lord is, the calm in one hand and the chaos in the other.

“I couldn’t ever forget that, the memory will never leave me.

“I couldn’t possibly doubt after that.”

And yet, Sr Lyons is very understanding of people and their choices. “People mightn’t necessarily be churchgoers, but they could be doing a lot of prayer.

“Similarly, you can’t underestimate the spirituality that is in people.

“It could be very different than ours but different doesn’t mean it doesn’t exist and that it’s not there – whether they’re Muslim, atheist, whatever.”

Sr Mary is a community woman at heart, with her being involved with the Board of Management in St Paul’s Secondary School, the St Paul’s past pupils’ group, the Older People’s Council (OPC) and the OPC’s whist club. 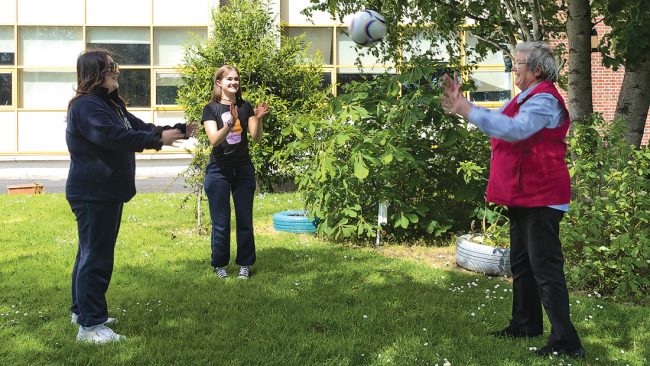 Sister Mary is a prolific card player, having grown up in an environment, in Glenroe, Kilmallock in Co Limerick, where the game Forty-Five was very popular.

Every Tuesday, without fail, Sr Mary works with Tony Shorten, May Shorten and Daire Bolger – fellow founders – to run the OPC whist club out of Tallaght Stadium – and it’s a raging success.

“The whole idea of it all is around participation,” Sr Mary explains.

“It’s not a competition, it’s not about winning or losing.

“You have tables of four. If you win on that table, you move up to the next table. If you lose, you move down a table.

“So you don’t have to have a card game partner and can come down on your own.

“Because of the nature of the game, this has opened a new world for some of the people that come along altogether and they’re making new friends all the time.

“It is great for integration and talking, it’s something where you can just sit down and have a chat.”

An advocate for promoting a positive mental health, particularly among the older generations, Sr Mary says that “community, family, and activity are the hallmarks of wellbeing”.

“Involvement and participation in activities are very powerful things.

“Having those little chit chats, going on a walk, they can have a real impact on someone’s day and their overall wellbeing.

“But it’s no good in there being activities if nobody participates, so it’s equally important that everyone feels the real need to take part in whatever it may be.”