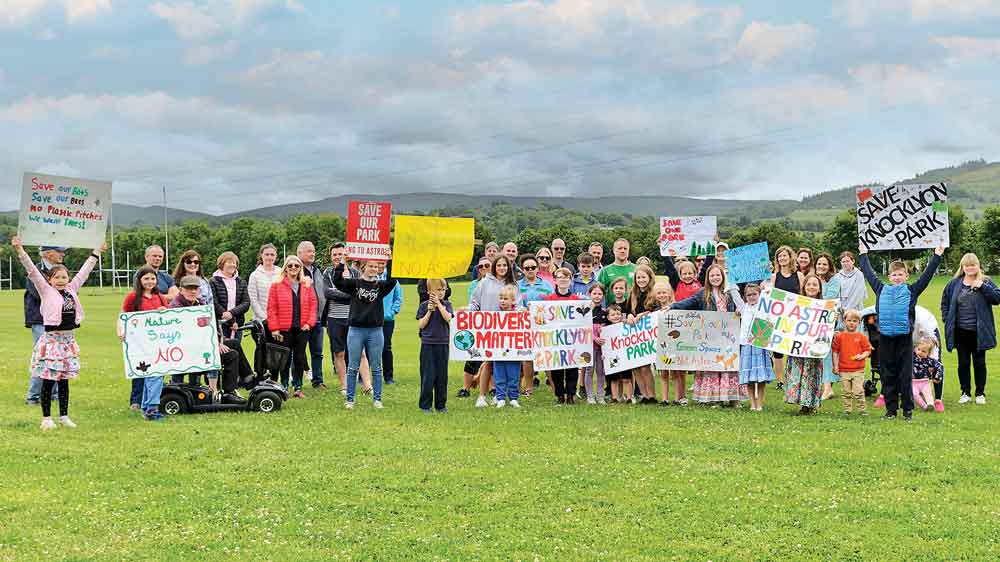 In March, South Dublin County Council chose Woodstown in Knocklyon as the location for a 3G pitch.

Three sites – Woodstown, Castlefield, and Cherryfield, Dodder Valley Park – were reviewed for their suitability to host a 3G pitch in each area of the county, a project which is expected to cost over €1m.

The local authority, who will be the manager of the facility, say the 3G pitch will be available to all manner of sports, groups and schools, operating via a booking system.

The decision was not well received by many in the Woodstown community.

Shortly after the March council meeting, a Save Knocklyon Park (SKP) committee was set up, which also includes residents from neighbouring estates and members of existing clubs who use Knocklyon Park.

The group held a protest on Monday, 13, at the park to outline their concerns.

SKP member and Biodiversity Officer Clare Hamilton, said the loss of Knocklyon Park as a free amenity, to be replaced by a “microplastic shedding, caged off, revenue driven, floodlit compound” will “destroy award winning wildlife habitats”.

“In the middle of a biodiversity crisis [this] runs counter to SDCC’s own biodiversity and tree management objectives, and is in opposition of their responsibilities per the Habitats Directive and EU Water Framework.”

Ms Hamilton said “no local clubs or park users requested a 3G pitch here” and the location was chosen by the council based on a “completely flawed” feasibility study that contained “inaccurate information and inconsistent weightings”.

“It is another example of the council having no clue or understanding of the community and the work of Woodstown Village with bio-diversity,” said Cllr O’Donovan.

“The first day it was brought up, I voiced my concerns.

“Across the road from the site, there was Part 8 plans in 2019 to build two dozen houses, which is the only time a council Part 8 didn’t go ahead.

“It makes no sense now to build an all-weather pitch on existing pitches in a housing estate.

“There are so many other sites that are suitable.

“As a community, we know how the council operate and how to deal with them. We are engaged, committed and I would implore the council to listen to residents and not put in this Part 8.” The SKP committee say they will be “fighting this proposal in any guise, at this location”.

“The park is an ecologically rich area that is habitat for bats, badgers, deer and a has even won a national award for its Pollinator Trail, which contains bee nesting sites and the larval food plants of many butterflies,” said Ms Hamilton.

“The 3G compound will replace a natural pitch, enjoyed by young and old, of all sporting abilities and none, with pay-per-play pitches, only available to a specific demographic of team sport users who can afford to book it.

“The rapid turn over of games needed to make the revenue model work will result in traffic congestion and safety concerns in the cul-de-sac styled adjacent estates.

“The floodlights will prevent the local protected bat colony from feeding and the pollinator trail and native trees within it will most likely be destroyed.

“Sadly the microplastics generated from the 3G pitch surface will blow onto the adjacent pitch, where red + amber list birds forage, and into Woodstown Stream, a tributary of the Dodder.

“While sporting infrastructure in general is to be welcomed, Knocklyon Park is not the right location for this, and will reduce, not improve opportunities for sports involvement around Knocklyon Park, at tremendous cost to the park users, both human and wildlife.”

Site will be subject to “full environmental assessments” – SDCC

At the council meeting in March, Suzanne Furlong, SDCC Senior Parks Superintendent, said the next steps in the project will involve the council consulting with local clubs and stakeholders.

After that, it will progress to preliminary design, and if all goes well, proceed to Part 8 consultation, and a decision in the chamber, construction, and handover.

Responding to residents’ concerns, a spokesperson for the council told The Echo: “The site will be subject to full environmental assessments as part of the preliminary design and planning consent phase of the project.”