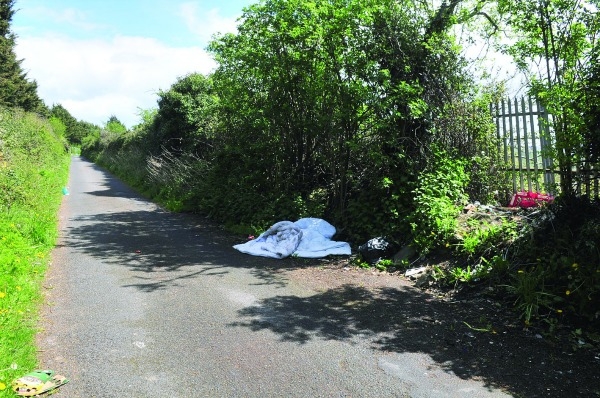 OVER a six month period, up to 44 complaints have been received by South Dublin County Council regarding illegal dumping at St Bridget’s Cottages/Knockmeenagh Lane in Clondalkin.

The area is a “litter blackspot” according to Sinn Féin Councillor Mark Ward, who asked the council to provide a report on “the problem of litter dumping” at the site over the last six months, and on actions the local authority are taking.

In response to Cllr Ward, SDCC said: “From October 1 to March 31, 44 complaints (five on MembersNet and 39 on Fix Your Street) of illegal dumping were received and investigated by the litter warden, resulting in two litter fines being issued.

“Unfortunately, it is proving more difficult to obtain evidence in relation to the identity of offenders as personal information is generally removed or shredded. There were 26 clean-ups organised during this period – four in October, seven in November, three in December, four in January, five in February and three in March.”

Cllr Ward said: It’s an ongoing concern, particularly for residents in cottages near the Old Naas Road. I’m on the phone at least once a week to residents there.”

The Enforcement and Licensing section with the council has two rapid deployment cameras available to monitoring illegal dumping throughout the county, which are constantly in use at locations where high level of incidents are recorded.

Cllr Ward also asked about the feasibility of CCTV cameras to “assist enforcement”, but whilst the council’s CCTV contractor deemed the location “unsuitable”, Ward says they have agreed to “have a look again.”

The council’s CCTV contractor – The Litter Warden – monitors this location at least twice a week.

NEWER POSTBallyer memorial page is a hit with 8,000 people
OLDER POSTReports of animal heads hacked off in bizarre cruelty