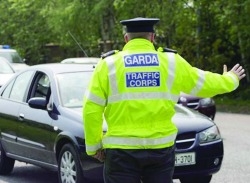 56 detections in one day at a single checkpoint

GARDAÍ made 56 detections for motorists driving with no insurance or NCT disc during one day, at a recent checkpoint in Ballyfermot.
The figure was revealed by Superintendent Brendan Connolly at the Policing Meeting in Ballyfermot on April 30, and drew gasps from the crowd, when details of the recent garda operation were presented.

Supt Connolly said: “There were 56 Section 41 RTA (Road Traffic Act) detections in one day. These were mostly for cars having no road insurance, no NCT or if the car is not roadworthy.”
Under Section 41 of the RTA, gardaí may seize a vehicle being used in a public place if the person driving the vehicle is not insured to drive the vehicle, if the person fails to produce a driving licence, or if there is no road tax in force for a period of two months or greater.
Other figures released during the Policing Meeting included a spike in Section 112 RTA offences – unauthorised taking of cars – for the first three months of 2015.
There were 434 cases of Section 112 offences from January to March 2015 – compared to 320 for the corresponding period in 2014.
“Most of the cars are taken for robberies,” said Supt Connolly.
Meanwhile, a 40 per cent spike in burglaries has led to a couple of national garda burglary units being deployed to assist local patrols.
There were 70 burglaries recorded during January to March, compared to 50 for the corresponding period in 2014.
“”Operation Acer (targeting burglaries) has redoubled and a couple of national units have being brought in to assist with burglaries,” said Supt Connolly.
“Robberies from commercial and private dwellings are roughly at the same level. A number of patrols are in the area, working overt and covert to tackle robberies.
“A large number have been detected for robberies of establishment, they are before the courts and files are being prepared for the DPP.”