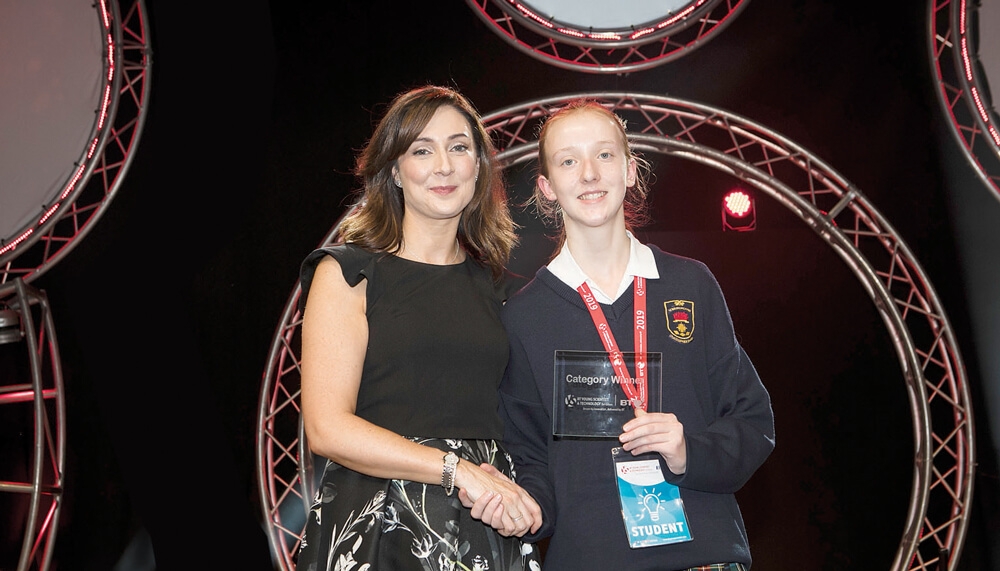 All praise for Young Scientist winners

Students from around the county were praised for their efforts, creativity and enthusiasm at this year’s Young Scientist and Technology Exhibition in the RDS last week.

This year students from Tallaght, Lucan, Ballyfermot and Clondalkin were represented at the annual exhibition which proved a huge success.

Among the schools who picked up awards at the Young Scientists Exhibition were The King’s Hospital in Palmerstown, St Joseph’s in Lucan and Kishoge Community College in Lucan.

The girls’ project was entitled ‘Using statistics to investigate changing use of language in primary students’ writing after 80 years’.

Their research was done in Kentstown National School in Kells comparing writings of primary school pupils from 1937-1939 that is archived in The Schools’ Folklore Collection at UCD, to today’s students.

The students are following in the footsteps of their brothers – Richard Beattie and Dylan Bagnall who won their category – Biological & Ecological Science last year (2018) and also took home the Irish Special Research Award for their project ‘identifying bats from the roost using an inexpensive raspberry pi motion detector and PCR’.

Richard and Dylan went on to become the overall winners of The Sentinus Big Bang Awards in Northern Ireland in June 2018 (NI equivalent to the BTYSE) which includes an all expenses trip to represent Ireland in the INTEL ISEF Competition in Arizona this May. The boys and girls have the same science teacher, Ciaran O’Connor.

Niamh was awarded first place at Intermediate Individual in the Chemical, Physical and Mathematical Sciences Category.

Niamh’s project re-examined a long-forgotten experiment first published by American Professor Alfred Mayer in 1878. His experiment, ‘floating magnets’ was at the time used as an analogy for certain molecular structures.

Niamh successfully extended Mayer’s findings and found a modern-day analogy ‘Coulomb crystals’ which are the subject of recent scientific research because they occur in the cores of white dwarfs and the crusts of neutron stars).

Kishoge had two teams entered this year. In the Junior Biological category, Sophianne Connolly, Japnitt Singh and Aqlan Ardy created a Bee App to track the diversity of bee species in Ireland. The project was selected with only a handful of others for a personal visit by Uachtarán na hÉireann, Michael D. Higgins.

The President praised the importance of the conservation of bees and was impressed with the level of complexity shown within the created app. Their project won a display award overall. Sophianne, Japnitt and Aqlan’s teachers were Mary Gorman and Nicole Hyland

In the Senior Technology category, Jordan Ahern and Liyana Muhammad Tariq Zafri created a ‘Smart Home for the Hearing Impaired’.

They created a project which would alert an individual who was hard of hearing of a ringing fire alarm or doorbell. Their project was singled out as “Highly Commended” as well as winning a display award. Their teacher was Micheal Griffin.

Jo-Ellen noticed that a lot of water is wasted to wash recyclable materials when we recycle.

From that, she wanted to find out if we waste too much water in washing these materials.

Jo-Ellen concluded that we can save 41.25 per cent more water if we wash our recyclables by using the second method. She concluded that while we are not ‘robbing Peter to pay Paul’ when it comes to recycling, we can reduce our water usage.

Nicole Hyland and India O’Reilly wanted their project to improve the lives of people living with visual impairments by allowing them to be more independent in their homes.

The project’s aim is to track what food items go in and out of their kitchen cupboards.

To achieve their vision for the project, the two innovative students designed a device that utilised Radio Frequency Identity (RFID) technology and expired leap cards to tag items in and out of the kitchen cupboard by using a RFID scanner.

They incorporated a ‘Text to Audio’ feature into the programme so that the item scanned would be identified and someone with a visual impairment would be able to differentiate between a can of beans or a tin of peas.

The students had a most enjoyable experience at the event and had the pleasure of meeting the CIO of BT Ireland, Conor Patterson, and the French Ambassador, Stéphane Crouzat.

The students were grateful for the support they received in school from their principal, Ms. Green, and the mentors at the Trinity Walton Club and Teen Turn who gave them assistance in preparation for the BT Young Scientist and Technology Exhibition.

Commenting on their success, St Dominic’s College’s principal, Sarah Green, expressed how proud she was of the two students: “Nicole and India have been very committed over the last two years to developing their computational skills, and the reward of getting to exhibit their project at the BT Young Scientist and Technology exhibition is very much deserved.

“They are positive role models for other young women to engage in technology and use it to improve the lives of those less fortunate.”