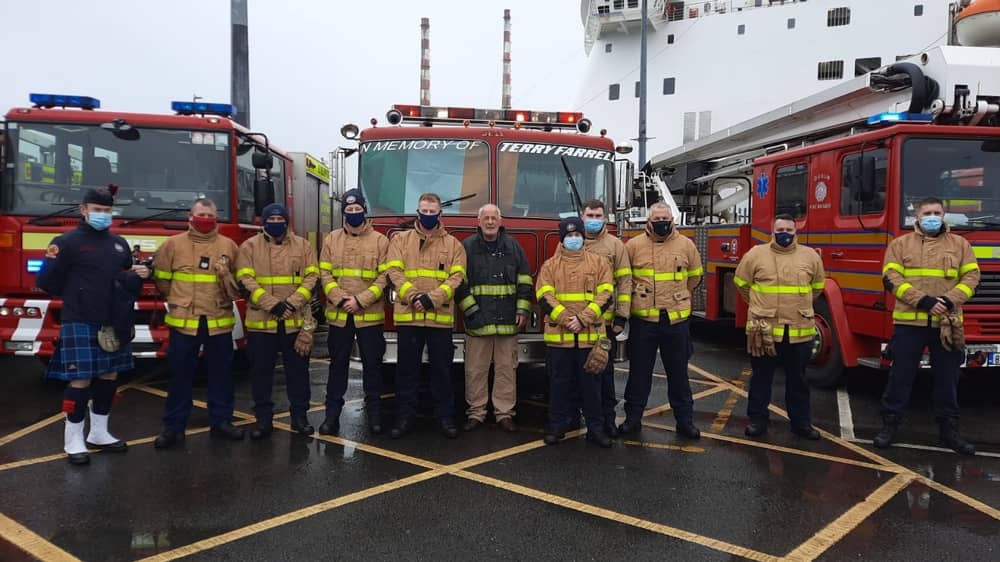 AN AMERICAN Fire engine received a warm welcome after its long journey from New York to Dublin.

As reported previously in The Echo, Crumlin native Liam Moore decided to purchase the 1987 Seagrave Tiller in an auction before Christmas and will use it for charitable events in the future.

The vintage truck was used for over 32 years at The City of Glen Cove Volunteer Fire Department in New York and has a 100-foot ladder and is over 50 feet long.

The truck began making its journey from New York to Dublin on Wednesday, March 24, with a procession from a full police escort from Glen Cove to the Port of Elizabeth in New Jersey.

The fire engine touched down onto Irish soil on Monday, May 3, and made its presence known with a procession through the streets of Dublin alongside fire trucks from Dublin Fire Brigade and Gardai.

After weeks of travelling over-seas. Speaking to The Echo, Liam said the process went a lot smoother than he originally thought.

He said: “It was shipped into England, and we had to register it then, bring it to Ireland and register it here. There was no real problem getting it in, it went a lot better than I thought it was going to be – a lot more expensive but a lot better.

“Customs were great, and the port authority were very quick to hand it over to us with no problems whatsoever.”

When asked about his reaction to seeing the truck in person for the first time, Liam said it was “lovely” to see it finally land in Ireland after the long wait.

“We had a great day I have to say – Monday was fabulous. It was lashing out of the heavens, but it was the best day out and everything went really well.

“[We wanted] to show the Americans that we could do it just as well as everyone else and put on a good show. The lads out of Dublin Fire Brigade – they done fabulous, and the lads outside the depot on Tara Street were really good, I can’t be happier.

“It looked good and it was enjoyable. It put a smile on a lot of people’s faces. If you get a few smiles here and there, isn’t that what it’s all about?”.

Liam’s new addition joins his other two trucks in his back garden in Crumlin – a 1967 Mack pumper from Torrington and a 1970 Hahn pumper from Pennsylvania.

He said he plans to bring it to the Midland American Auto Club in Kilbeggen, Co Westmeath to open the 100-foot ladder when he can.