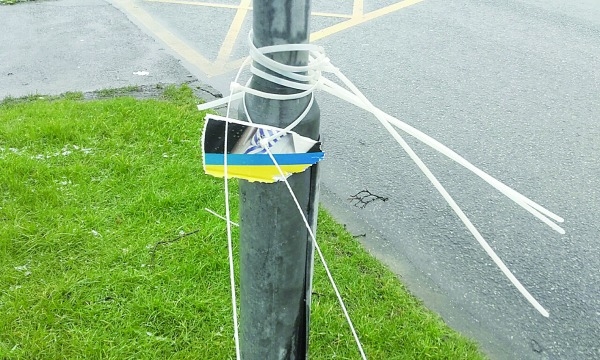 AS THE dust settles on the 2016 General Election and the new Dáil deputies enter into negotiations to form a new government, local residents have raised concerns surrounding the number of cable ties that are being left on lamp posts and railings across the county as candidates’ posters are being removed.

One local resident contacted The Echo about the cables ties left in their area on Kiltipper Road and Heatherview Road, calling them an “eyesore”.

They told The Echo: “It’s bad enough that election posters are still up a week after the election, but what is worse is the state that our wannabe deputies have left our lampposts in after their posters have been taken down.

“The cable ties dangling from them are a complete eyesore. You will see there are so many cable ties that it couldn’t be just one of the candidates who are responsible.

“This would not be accepted in the leafy suburbs of Dublin 4 and the people of Dublin 24 should not stand for it either.

“Our new representatives and those that weren’t elected should be ashamed of themselves.”

A call to remove cable ties was also made by local Fianna Fáil councillor Charlie O’Connor, who also called upon members of his own party to ensure their cable ties were removed.

He said: “I once again call on all political parties to respond to the concerns of many in the community who are upset that cable ties are being left on lamp posts, railings and other surfaces following the removal of political posters.

“I have received many calls on the subject since the General Election and have observed the situation for myself.

“Such cable ties are evident throughout the region and I hope that all political parties, including Fianna Fáil, would ensure that these eyesores are removed now.”

Section 19 of the Litter Pollution Act 1997 and the Electoral (Amendment) (No. 2) Act 2009 outline the requirement for election posters.

According to these acts, the posters including the cable ties, must be removed within seven days of the polling day – any posters in place after the stipulated timeframe are deemed to be in breach of the legislation and are subject to an on-the-spot litter fine of €150.