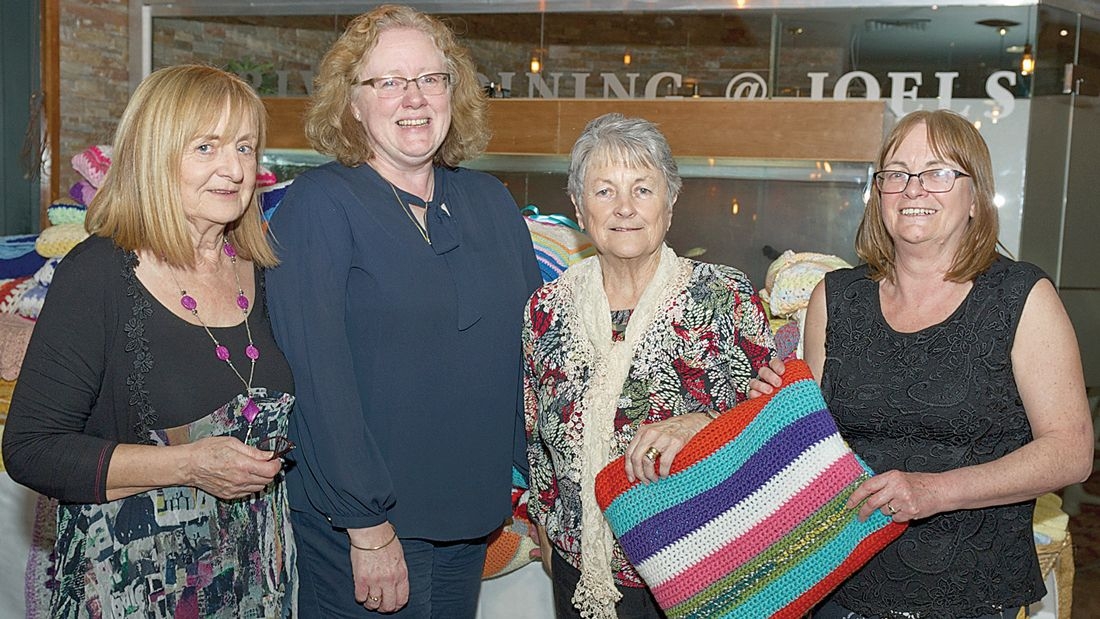 Bravery blankets for children with cancer

A GROUP of 70 women handed over dozens of handmade ‘bravery blankets’ to a nurse from Our Lady’s Children’s Hospital, Crumlin, on Monday night, to be given to children who are undergoing treatment for cancer in St John’s Ward.

The bravery blankets are also known as ‘quillows’ as they function has both a quilt and a pillow, and are given to the children to boost morale and to offer comfort while they’re undergoing their treatments.

May Byrne, Alice Ward, Mary Breen and Margaret Goulding with some of the blankets they presented to St John’s Ward

The idea for making the bravery blankets came about after Margaret Goulding, a Raheen woman who teaches knitting and crocheting classes, happened to have a nurse from St John’s Ward in one of her classes, who suggested that quillows would be ideal for the children in the ward.

Ms Goulding then mentioned her idea to the women in the classes she teaches and is involved in, including the Silver Surfers in Springfield and a crocheting group in Kilnamanagh, who then got on-board with the plans and helped to make the coveted and colourful blankets.

“The blankets are crocheted and knitted, and the blanket folds up into a cushion,” Ms Goulding told The Echo. “Each child in the ward gets one of these blankets, and they can take them home too.

“The nurses say the blankets are a great talking point, as the children talk about the colours and they spend 20 or 30 minutes picking out their own blanket.

“It’s been a great success, and it works in two ways – the children benefit from the blankets, and a lot of the women who are knitting and crocheting are retired, and doing it is good for mindfulness and also the feeling of doing something worthwhile.”

Ms Goulding had a stall at the Knitting and Stitching Show in the RDS last year, to encourage others to participate in the creation of the blankets on a nationwide level, and she said that one interaction she had with a woman who came up to the stall was particularly memorable.

“A woman came up to the stall and said her son should’ve been in his 40s now, but he had died of childhood cancer,” said Ms Goulding.

“I said that I was sorry, and that I didn’t mean for the stall to upset her, but she said, ‘At least I’ve found something positive that I can do to give back to Crumlin Hospital for the care they gave my son’.”

The women gave the blankets to the nurse in Joel’s Restaurant on the Naas Road on Monday night.

They also presented a cheque for €900, that was raised through a raffle, to Springfield woman Norah Merriman, to enable her to make her annual trip to Kolkata with the aim of getting children there off the streets and into education.