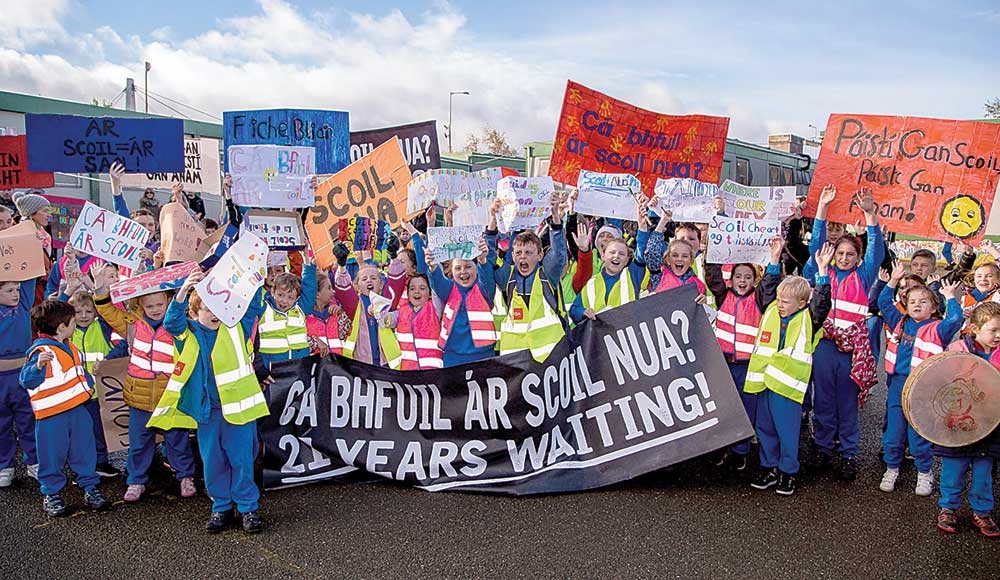 THE parents and students of Gaelscoil Chnoc Liamhna took their 21-year campaign for a new school building to the Dail this week, in a united effort to move the promised project forward in the health and safety interests of children and staff.

Based out of 16 prefabs in Knocklyon, Gaelscoil Chnoc Liamhna is facing another damp and cold winter despite the school community highlighting the health and safety risks posed to children with the Department of Education and Skills.

This summer, Gaelscoil Chnoc Liamhna spent around €5K upgrading and maintaining the school, with money fundraised by the school being used throughout the year to make the school safe for children.

“Health and safety is a huge issue and this summer we spent a few thousand euro trying to make the building safe.

“We spend money raised by the school every summer on maintenance, which is not right. . . this money should be going towards programmes for the children.

“We are constantly spending money on maintenance throughout the year if, for example, a section of flooring rots or a leak starts.

“The Department has over the years reimbursed some of the money, but not all of it.”

She added: “We have sent numerous letters to the Department [of Education] informing them that the building is not safe but nothing has been done . . . nobody has even come out to check on the building.

“We were hoping that we wouldn’t have to suffer another winter in these prefabs, but here we are.

“Dampness and leaks will be our biggest problems over the winter months – our storage heating is extremely inadequate.”

As reported in The Echo in March 2016, title issues on a strip of land that runs through the school’s playground stalled development in recent years, a situation which prompted the school community to march on South Dublin County Council’s HQ calling for action.

This issue has since been resolved. However, the school is still no closer to its promised building.

“As we understand it the Department is in the process of acquiring the land from the council,” Ms Ni Ghallchoir said.

“From acquisition to the building stage can be a very long process and we need it to move along . . . and we are trying to highlight the fact that it is a priority.

“We hope communication between the Department and the council moves quickly.”

The council added: “The Department of Education and Skills are carrying out their due diligence, as is their requirement in relation to their acquisition of the site.

“However, South Dublin County Council is not aware of any specific issues at this time which would impede the conveyancing process.

“As far as the Council understands, the Department will shortly be progressing the project to architectural planning, in tandem with completion of the conveyancing process.”