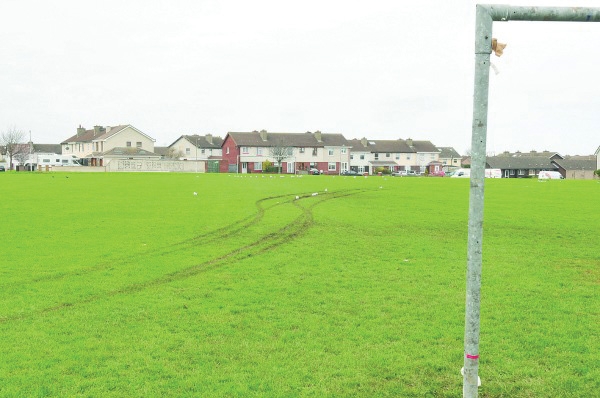 THE club secretary of Tymon Celtic is appealing for local Tymonville residents to be vigilant, after being shocked to find the club’s only playing pitch destroyed by tyre tracks after local vandals drove a car across the field in bad weather.

Club secretary Paul Halpin, whose father Anthony manages the single-team club along with James Halpin and Kevin McCarthy, discovered the damage on Saturday morning while checking the pitch after the club’s fixture for the weekend was called off due to the weather.

As a result, the club is stuck wondering if its remaining home fixtures can be played on the pitch as South Dublin County Council attempts to repair the damage as quickly as possible.

Paul told The Echo: “On Saturday morning, my dad noticed it. Our match for that weekend had been called off anyway because of the weather, but the remainder of our home games still need to be played.

“In the last couple of years there has been not enough interest and not enough people around, and we are scaled down to one team.

“When something like this happens, you wonder, what’s the point? But my main ambition for the club is to see a schoolboy team, and the kids in the area to be looked after.

“If this team goes, the club name goes so we have to keep the football team going for the area. It’s just one thing after another.

“There’s 15 years of history with the club, we had three senior teams and we got so big we had to move to Roadstone. We won trophies, we had a schoolboy academy, but now we have no local sponsorship, our players have to get changed in Scoil Íosa and we can’t afford to rent out somewhere to play our remaining games.

“We have a good relationship with the council and they’re doing their best to get us back onto the pitch. It puts us in jeopardy and it puts plans in jeopardy to possibly establish an annual football event in memory of Robert Cummins which I hoped to plan for this summer.

“There’s an unregistered car parked now in Tymon and the fear would be that this happens again. I’d ask that everyone in the area keeps an eye out so that this doesn’t happen again.”

A video of the damage to the Tymon Celtic playing pitch can be viewed online at The Echo Facebook page.