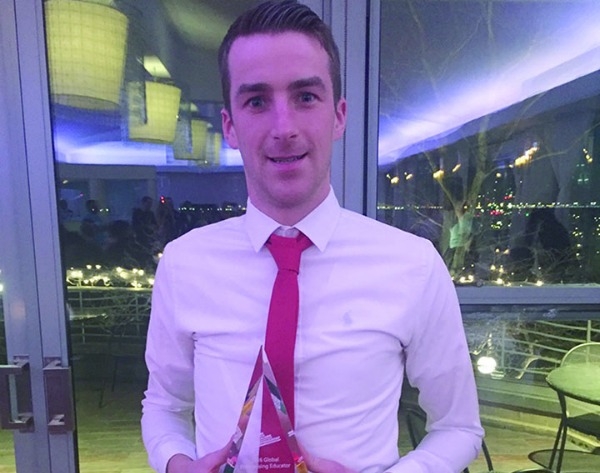 A TEACHER from Colaiste Bride was recently the recipient of a Global Enterprising Educator Award at a ceremony in New York City, reports Laura Lyne.

Paul Fitzgerald, a business and enterprise teacher at the school, received his award from the Network for Teaching Entrepreneurship (NFTE) for his work with youth service Foroige in integrating the NFTE programme into Transition Year in Colaiste Bride.

As part of the programme, students are given €15 to help them set up and run a business of their choosing, with more than 150 students having graduated from the programme in Colaiste Bride since it started three years ago.

Paul’s trip to New York was all expenses paid, and guest speakers including Chelsea Clinton and Troy Carter spoke at the NFTE Global Showcase, where Paul also got to showcase the work he does in Colaiste Bride.

After the event, Paul said it was “one that he will never forget” and that following his return to school he “realised the significance of his achievement in winning this award”.

He also thanked Foroige for the “continuous support” that he receives, and for the “unwavering trust and support” he receives in delivering the NFTE programme from Colaiste Bride Transition Year Co-ordinator Mrs Lawlor and from the Principal and Deputy Principal, Ms Kilmartin and Mr McEntaggart.