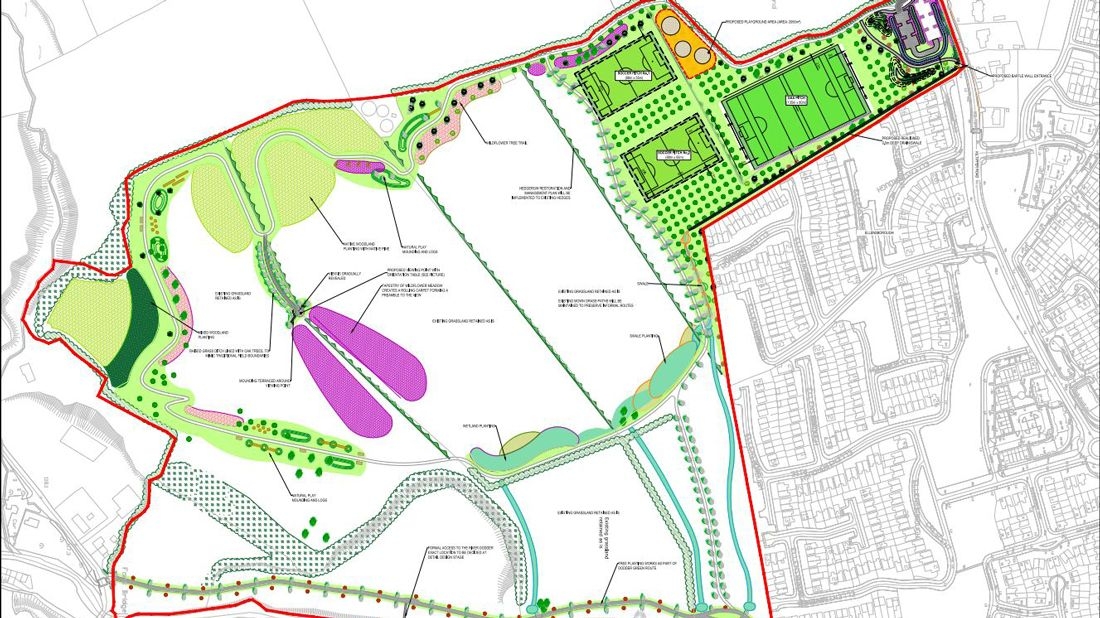 THE Chief Executive of South Dublin County Council has recommended that plans for the development of sports pitches and additional car parking in Kiltipper Park should go ahead, after assessing a number of concerns that were raised during the Part 8 public consultation process.

As reported in The Echo last May, the council is planning to carry out a number of works in the park, including constructing 30 additional parking spaces, and a new shared surface entrance and access pathway.

An artist impression of the park

Also included in the notice is the provision of a GAA pitch with vertical ball-stop netting, two soccer pitches, a children’s playground area and linear natural play areas.

Integrated swales, drainage, wetland areas and all ancillary works also form part of the plans, and provision of all incidental park furniture, such as signage, bins and benches, is included.

The public consultation process ended after four weeks on July 8, and members of the public raised several concerns about the development.

One of the issues that was raised by several Ellensborough residents was about the chosen location of the pitches, the ball stop netting and the proximity of this to their houses.

Alan Edge, Independent councillor for Firhouse-Bohernabreena, tabled a motion about the issue at Monday’s monthly council meeting, and it was carried after receiving 24 votes in favour.

Cllr Edge’s motion called on the Chief Executive to consider reorienting the soccer and GAA pitches to maximise the distance from the houses on Ellensborough Grange.

He said: “I’m pleased that the council have taken on board the concerns of residents about the proximity of a proposed GAA pitch to homes in Ellensborough.

“While I absolutely welcome the council’s sports pitch strategy and the need for more facilities like this, a very careful balance needs to be struck in terms of where to site pitches in order to ensure that the impact on residents is minimised.

“I’m pleased that the council have agreed to consult with residents going forward on matters such as how to mitigate the visual impact and the noise from the pitches.”

Other issues which were raised in the submissions include concerns about the protection of the natural and historic environment of the park.

In response, the Chief Executive stated the aim of the project is “to build upon the park’s potential as an ecological park.

“The proposal does not remove hedgerows but allows for the reintroduction of native species of hedging throughout the park.

All existing internal and external hedges are to be retained and reinforced with additional planting to secure the park and increase their biodiversity potential.”

He added that the plans are “not intensive” and will consist “predominately of low impact ecological interventions”.

A number of submissions also asked for the provision of a dog run in the plans, which the Chief Executive said “is accepted in principle and can be considered at the detailed design stage of the projects”.

After assessing and considering the matters raised during the Part 8 process, the Chief Executive has recommended that the plans go ahead and advised that the council should “proceed with the Part 8 proposal to construct the public park development as proposed at Kiltipper Park.”