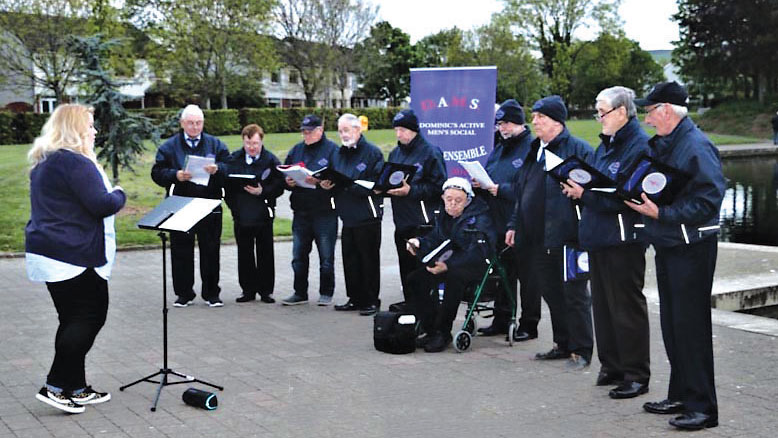 DAMS concert in aid of Red Cross for Ukraine

The Dominic’s Active Men’s Social (DAMS) Vocal Ensemble is presenting a show alongside Now and Then Productions in aid of Ukraine.

DAMS is a social club designed for retired men to partake in activities they didn’t have time to enjoy with a full-time job. One of these activities includes the DAMS Vocal Ensemble.

Originally formed under the title of DAMS Singing Group, the ensemble changed its name when Miss Cara Davey, a 28-year-old mezzo soprano, came on board to aid and direct the group.

The Vocal Ensemble has been practicing every Tuesday from 7-9pm for the past two and a half months to prepare.

‘The Songs of Bealtaine’ will contain musical stylings from the DAMS Vocal Ensemble, Cara Davey, and the Now and Then Production company, a Tallaght based music group.

The group is comprised of different retirees in the DAMS club, and the average age of the members is around 73 years old.

Dermot Halligan, a current member of the DAMS Vocal Ensemble, joined the group, and subsequently the ensemble, after asking to help with DAMS photography classes. He enjoyed his time so much that he decided to join the club himself.

According to Halligan, the concert was originally designed to split all retiring collections between St. Maelruain’s and the Red Cross for Ukrainian aid.

However, in a generous gesture by the church, St. Maelruain’s insisted that all funds be donated to help Ukrainian efforts.

The DAMS Vocal Ensemble’s production will take place on Sunday, May 29 at 7 pm in St. Maelruain’s Church.

Entry to the show is free, and there will be a collection for Ukraine Red Cross on the night.