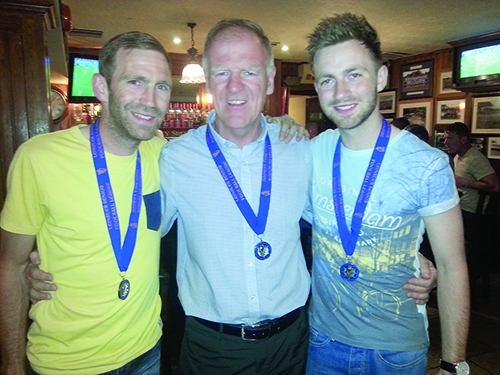 NEWTOWN Rangers will, this season, be operating without the services of one of its most influential figures in David Grogan.

Club Secretary for the past 15 years, Grogan has opted to part company with the club as a result of work commitments, having also held the posts of Chairman, Treasurer and Manager during his 23 years with the club.

He, along with the likes of Kevin McGrath, John Mulligan, Les Douglas, Gary Kavanagh and Mick Keeley, has been a driving force behind the club which has enjoyed huge progress both on and off the pitch.

Indeed over the past 10 years some €500,000 has been invested in Newtown Rangers with the development of its new clubhouse and astro pitch.

On the playing side, the club has recorded some major highs most notably in the 2003/04 season when their intermediates landed a treble of Moore Cup, Gilligan Cup and Senior Division 1B titles.

Among those on that team were a core of players who had come up through the schoolboy ranks under Grogan who had become involved with the club when his son Daithi joined at the age of eight.

“When I look back on it I can see that the club has come such a long way.

“In terms of football we have improved and facil-ities-wise we’ve just come so far and I’d like to think I played my part in that.

“We’ve had some poor years and I always felt that I could never walk away from the club when we were struggling.

“I suppose that’s what kept me going, but with Keith Hughes and Declan Turley coming in to take over the first team, the club is in a really good place at the moment and I felt that it was the right time to step away” he explained.

His services have since been acquired by the Leinster Senior League who have brought him on as a member of the eight man executive.

While this post is not as time consuming as that of the role he played in New-town, Grogan is still relishing the challenge.

“I felt I still had some-thing to offer, something to contribute to the league.

“They were looking for football people and so hopefully we can bring that experience to the league” he added.