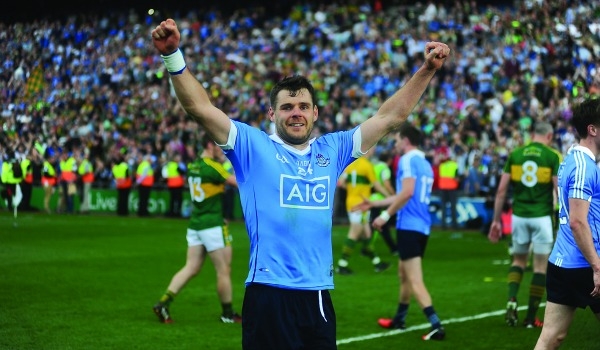 DUBLIN will be looking to chalk up their 26th All-Ireland football title and fourth Championship in five years when they face-off against Mayo in Croke Park on Sunday.

With only Kerry having more success in the All-Ireland, the Dubs will be relishing their chances to add another title in what is a repeat of the 2013 final which saw the boys-in-blue run out 2-12 to 1-14 winners after two goals from the ever-present Bernard Brogan helped complete the impressive win.

After overcoming a tough challenge from the Kingdom in the semi-final, Jim Gavin’s men will fancy their chances against the Connacht side who have not claimed an All-Ireland title since 1951 when they defeated Meath 2-8 to 0-9 in Croke Park.

The journey which began back in June after Dublin beat Laois 2-21 to 2-10 will culminate on Sunday, when Dublin might well copper-fasten their already legendary status or Mayo celebrate ending their 65-year wait for championship glory.

Dublin beat a spirited Donegal side 1-15 to 1-10 in the quarter-final to setup a clash with old rivals, Kerry. Despite Éamonn Fitzmaurice’s side putting in a great performance, Dublin proved too good in the second half and they managed to complete a turnaround.

Despite going into the final as underdogs, Mayo will fancy their chances against an all-star Dublin side after they came through a tough quarter-final in which they saw of the challenge of Tyrone, winning by a slender margain of 0-13 to 0-12, followed up by a convincing semi-final win against Tipperary at Croke Park.

Ballyboden St Enda player Michael Darragh Mcauley will be in the squad to face the Heather county and his club coach, Andy McEntee feels the Dubs have a strong advantage.

“I was really impressed with Dublin against Kerry” he said.

“It was the best performace I’ve seen in a number of years. I think Dublin will be too good for them. Mayo need to have a go, be big and physical, then you never know.”

“They are the most elite football team at the moment and they are technically so good. Usally Mayo have two scorers, they will need scores from all over the pitch to have any chance.”

Dublin will look to right corner-forward Dean Rock, son of legendary Barney Rock, to maintain his scoring against Mayo after he registered 20 points in 11 apperances to date for the Blues and has been one of the most influential players in this campaign.

Mayo will have to pull out the stops to beat a Dublin team that is on a 27-game competitive winning streak, their last defeat back in 2015 to Kerry in Killarney in the league.

Mayo’s Aidan O’Shea will have a key role to play for Mayo at midfield while Cillian O’Connor is another player who could cause problems for the Connacht defence.

In the half forwards, Diarmuid O’Connor will pose problems for the Blues defence as will Alan Freeman.

However O’Shea is the key man for Mayo and if gets control of midfield, the Dubs will have to be wtached very closely.

Ballyboden’s Michael Darragh Macauley will have to keep a close eye on O’Shea to make sure the Dubs get a steady flow of ball into the attack.

One aspect Mayo will need to be aware of is Dublin’s attack and how they can match that.

With players such as Diarmuid Connolly, Brogan, St Jude’s Kevin McManamon and Rock, the Mayo defence, who are without former all-star Ger Cafferey who has been replaced by Barry Moran, many believe that this is where Dublin can exploit Mayo as the latter is not a natural defender and at times plays sweeper.

Having a reputation for hard-work and grinding out results in the big games have gone hand-in-hand with Mayo sides over the past five years, although they will need to remain focused and stay tuned in and not let complacency become a factor like they did when they faced off against Galway and Tipperary in the Summer.

Stephen Cluxton, who kicked the winning point back in 2011 for Dublin against Kerry, may prove pivotal with his kickouts.

Mayo will have to either squeeze or sit off the Dubliner, which will either force them to apply plenty of pressure in the Dublin third or make sure they win enough of the ball from Dublin players coming out of their defensive half.