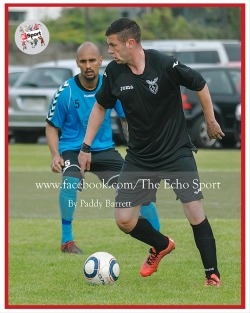 It’s that time of week again, and we’re just putting the finishing touches to this week’s Echo Sport after what has been a bumper seven days for sport. We were at the United Churches Football League Shield Finals on Monday, and our featured games include Kingswood Castle v Orchard Celtic from Ballyfermot, and Lucan’s Arthur Griffith Park v Sandyford United. Among the other teams taking part were Stedfast United, Cloncastle United, Walkinstown Athletic and Belgrave AFC, and we have reports and pictures from all six games.

Elsewhere, Drimnagh Celtic took on Tallaght’s Old Court Celtic in the final of the LFL’s Watkins Cup, and there is a full report and pictures from what was a tense and exciting game in the Transport Club. Shamrock Rovers travel down to Inchicore for the ‘Luas Derby’ on Friday night, and we have all you need to know ahead of what is sure to be an important clash between the two Dublin clubs.

The Senior Football Championship kicks off tonight (May, 6), and we’ll be at what should be a brilliant clash between St Anne’s and Round Towers in O’Toole Park.
Meanwhile, Ballyboden’s success in the U14 Féile is also covered, while we also have news of Tallaght Rugby Club’s win in the John Madden Plate. And that’s not forgetting the 2015 Irish Open Swimming Championships, where several local swimmers enjoyed success.

As always, we have lots of other news across several sports, so don’t forget to grab your copy in the shops this Thursday. Alternatively, you can avail of our newly launched online subscription service, where you can read the Echo Newspaper on your mobile, tablet or computer. Simply visit Echo.ie for all the information.

Finally, this weekend sees the DDSL Finals take place in the AUL Complex. As always we will be covering both days, and if your club are competing make sure and let us know. Among the teams taking part are Crumlin United, Knocklyon United, Esker Celtic, Lourdes Celtic, Sacred Heart, Collinstown, St John Bosco, St Francis, Firhouse Carmel, Jobstown Celtic, Ballyfermot United, Kilnamanagh and Templeogue United. If you see the Echo reporters and photographers make sure to say hello.