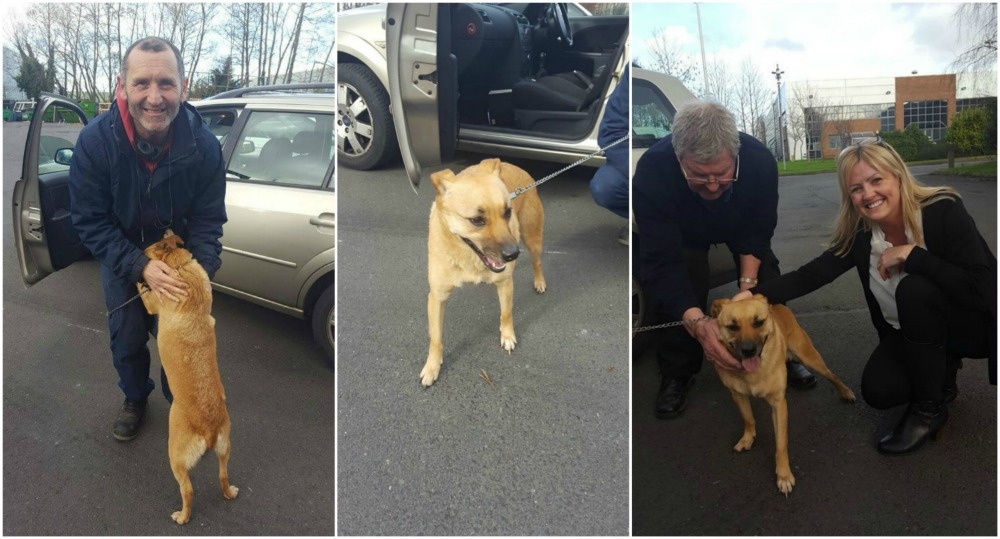 The story of a much-loved family dog that went missing from Finglas in July 2016 came to a happy ending last Wednesday when Goldie, a golden cross-breed dog, was rescued on the grounds of Tallaght Hospital.

If the length of time that Goldie was missing for is staggering, the level of dedication shown to find her is even greater, with a huge number of people involved over the course of eight months.

The day her owner Brian Duggan collected her he cycled home with the new puppy, passing through Griffith and Glasnevin Avenue – little did he know he would be searching the same area three years later.

Before making her way to Tallaght, Goldie was spotted across areas including Glasnevin, East Wall, Dublin Port, Rathmines, Harold’s Cross and along the Dodder.

“We had a huge number of people helping us in fairness,” said Brian. “It was incredible really to see so many people who took an interest and we are grateful to every one of them.

“I remember being in the port and thinking maybe she had got into one of the containers or onto one of the boats, and after several sightings of her the trail went cold for a while.”

“The guys from Animal Trust Fund were phenomenal in fairness, they were out most days, and went out on days I couldn’t make it along with loads of volunteers who gave up their time.”

By the time October came Goldie was still being spotted, but by now had lost a considerable amount of weight, and the trail had led Brian to Citywest, with previous sightings of the dog along the Dodder, in Firhouse, Old Bawn and in Saggart.

“I remember being in Saggart putting up some of the posters and looking at the Naas Road and thinking if Goldie made it this far maybe she is gone now,” said Brian.

Without a sighting of Goldie for some time, the volunteers continued to look, and then one day in December a message to the ‘Find Goldie’ Facebook page ignited hope once again.

A volunteer who had been helping in the search had begun working in Tallaght Hospital. To her amazement one day while in work she thought a dog roaming the grounds looked similar to Goldie.

Eventually she managed to get a picture of the dog and sent it to Brian who was sure it was his beloved family pet.

Six weeks ago a team of volunteers, including Bob Nicholson and Bernie Courtney from Animal Trust Fund, began monitoring the area in the hope of seeing Goldie.

Large fox traps were set up in an attempt to lure the dog in, but it appeared she was being fed by some people working in the hospital.

Brian said: “When I got the first picture of her from Tallaght Hospital I was expecting her to be skin and bone but she looked much healthier – as if she was being well fed.”

He continued: “We were up there most nights trying to gain her trust again but any time we thought we had her she would disappear.

“Then last Wednesday I had been in the Square and as I came back into the hospital grounds, with the sun shining down, I looked up towards the raised hill and there she was.

“I knew she could see me so I called her in the way I would every day when I would get home and waved my hand in the same way.

“She scuttled down the hill and raced towards me, leaping into my arms, it was amazing. I couldn’t get the lead out of my pocket quick enough.

“I want to thank everyone who helped, they know who they are. Lots of people gave up their time over the eight months or so and we are forever grateful to them.”

Brian would like to thank all those who helped in Goldie’s rescue, including Bob, Sarah, Lucy Dave Bernie and John.