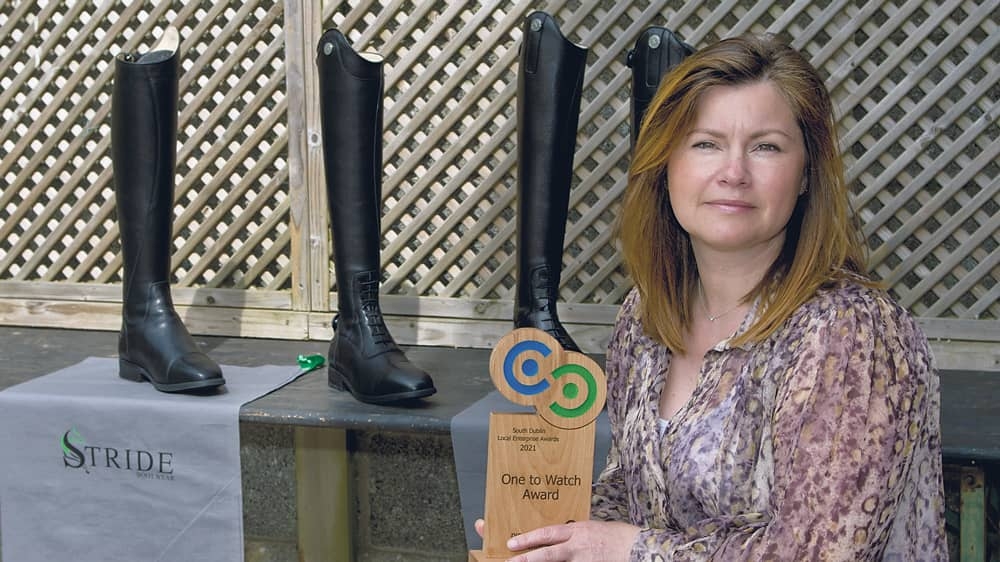 Equestrian footwear company is certainly ‘one to watch’ in future

AN EQUESTRIAN footwear company is galloping towards success after taking home the LEO ‘One to Watch’ Award this year.

Stride Bootwear was set up by Templeogue woman Emma Hedderman, after she decided to combine her two passions in life – fashion and equestrianism.

After being made redundant in December 2019, Emma said she knew that she wanted to start her own business. She said: “I have always wanted to have my own business. It has always been something burning inside of me, but I suppose I never knew exactly what.

“I always worked retail while I was still at school, so fashion was always my love. Emma told The Echo.

“I have been in fashion for 15 years and I pivoted into equestrian when the market changed, and a recruitment company contacted me about going into a family-owned business.

“I also grew up riding, I had ponies and I would have competed and qualified for the RDS.”

Emma said she knew that there was a gap in the market for a tall boot brand.

“I was aware of a couple of suppliers in Portugal, and I got on a flight and it was the Monday before the lockdown in March,” she said.

“I came home and I knew I had a supplier. Their product is excellent, and they have been in business for five generations.”

After finding her supplier, Emma approached LEO with her idea to start Stride Bootwear and they gave her the support and financial aid to make her business idea a reality.

“I thought I would go to LEO, and that gave me the confidence I didn’t have. I told them the idea, I was assigned a mentor and I’ll never forget my mentor saying ‘yes you need to do this’.

“My biggest problem was my confidence. That is why I feel so passionate about being a woman doing this because my biggest challenge was myself.

“I had a lot of people around me saying ‘no you can’t do that’ and ‘why would you do that it’s crazy’.”

Emma said that her LEO mentor recommended she worked towards getting a priming grant to start her business.

“I have a four and a five-year old and no childcare, and I had to start my work at 5am but it really made me hone in on what my business plan was,” Emma told The Echo.

“I did that, and I think it was September last year I was approved, and that was a milestone for me because I thought, ‘I have some money now to do this’.

“The primary market I was going after was the US market, Canada, Ireland and the UK.”

Due to travel restrictions, Emma was unable to travel to the states but was fortunate to have a contact of an independent salesperson who wanted to sell the boots.

“In November/December last year the boots were not finalised, there were still some details to be finished and my guy in the states wanted to see the boots,” she said.

“Because of Covid and everything that was going on I said ‘right, let’s do it’ and I sent the boots with a health warning that they are not finished.

“I sent the boots to the states and I remember getting into bed and I had this total and utter panic of ‘oh my god, what if he doesn’t like the boots?’,” Emma recalled.

“I didn’t hear back from him and then I’ll never forget getting the text that said ‘Emma, they are absolutely beautiful’.

“I had put a forecast together – they went to a very important influential equestrian retailer in the states.

“I had budgeted that they would probably buy about 25 pairs and my first order was 225 units – I nearly passed out.”

Another milestone in Emma’s journey launching her business is when she won the LEO ‘One to Watch’ Award at Enterprise Week in March.

“I was genuinely very emotional getting the award. For me, being short-listed I had won. It really came full circle for me that I wouldn’t be where I am if I hadn’t had that experience with LEO.

“I think the biggest thing for people starting out is that you have to find your tribe. You need to find the people that will independently and rationally knock your idea around and support you.”

Emma is in final negotiations with the leading equestrian retailer in Ireland and has two salespeople in the states currently taking in orders.

“My goal is hopefully by the end of August there is a tradeshow, where I can go and visit all the key accounts, until then the two guys will keep taking in the orders.

Emma concluded: “I will have a proper launch and my first proper delivery goes into the states in July and I expect to get into the UK in another month when my website and everything is set up.”