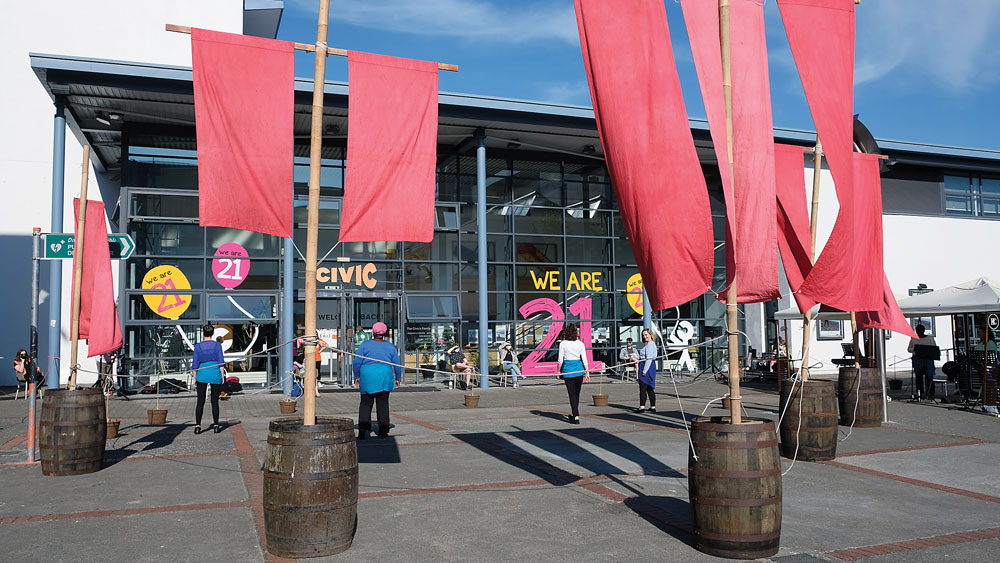 Cessair being performed outside the Civic Theatre

Exploring the Female Voice – Cessair at The Civic showcases diversity

Cessair, the Civic Theatre’s most recent exhibition, opened with a song.

The music guides the audience through the story of a woman who set sail for Ireland with over 100 other women, though only 53 survived the journey.

Performances took place outside the theatre, with ropes marking the boundaries of the stage. Actors dressed in blue and black moved around the stage, passing around the role of Cessair.

Only six spectators were present for each showing, though others were able to watch the performance from nearby steps.

After each performance, spectators were led into the theatre itself for the socially-distanced audio exhibition.

Every person sat in front of their own speaker and listened to a different story. 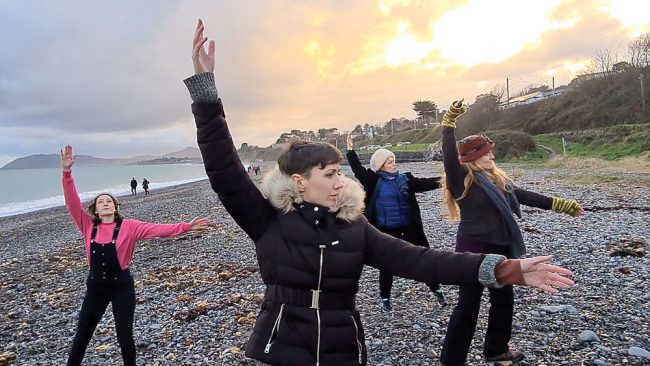 The exhibition, which showcased 50 different female voices, was inspired by the souls lost during Cessair’s journey.

“You hear yourself and everyone you know in the stories,” said director Jenny Macdonald. “I hope people feel really inspired by their personal and collective power.”

Cessair was created by Macdonald’s SoloSIRENs collective, a group all about uplifting women and amplifying their voices.

“There’s more to storytelling and teaching and learning from each other than the male gaze,” said SoloSIRENs member Neltah Chadamoyo. “I hope people walk away with the knowledge that Cessair is in all of us – in the land we live in, the land we breathe.”

Much of the workshopping of Cessair took place online with Zoom and the group was only able to meet in person a short while before the premiere of the exhibition.

“It’s really astounding how much we did on Zoom,” said performer Aofie Dempsey, “people got really creative about how we did it.”

Even though the performers weren’t able to see each other in person, the online workshops for Cessair tied the women together and gave them a creative outlet.

“Having this through the pandemic has been really important,” said Dempsey.

Cessair became more of a global project than originally intended due to the rise of online communication platforms during the pandemic.

“The siren call went all over the world,” said Chadamoyo.

The team collected stories from women on every continent to put in the audio exhibition.

“It’s been a year for the world to explore diversity and equality,” said Chadamoyo.

Cessair was a long time in the making, and Macdonald and the rest of the SoloSIRENs team are looking forward to reflecting on their work and celebrating the project.

NEWER POST‘Skin cancer is rising and is expected to double nationally by 2045’
OLDER POSTCountdown to Tokyo: “It’s a weird one to try and wrap your head around”