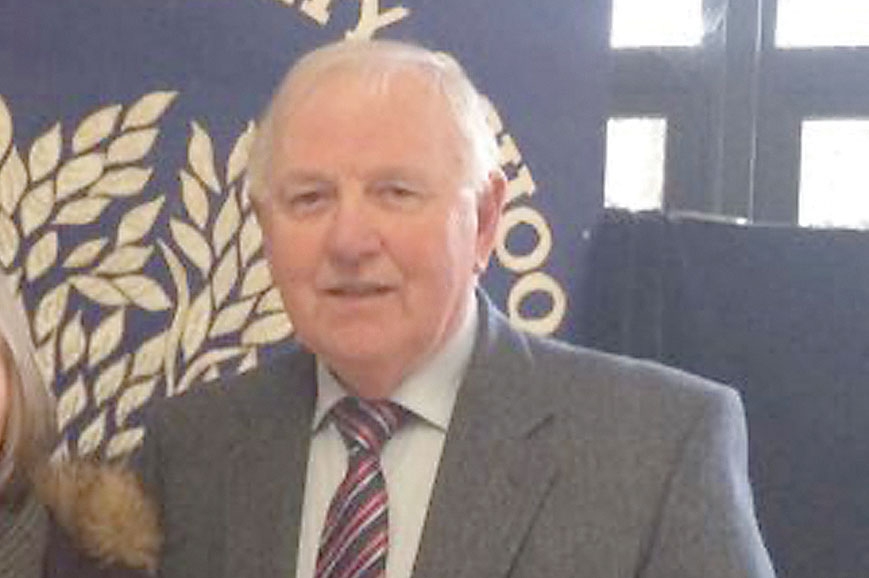 TRIBUTES are this week been made to Frank McCarthy, the former principal of Old Bawn Community School who passed away on Sunday, April 5.

Frank joined Old Bawn CS in 1982, and was Deputy Principal until 1993 when he became the school’s second principal.

This week, a number of his former colleagues joined together in words to remember Frank, describing him as a teacher deeply committed to the students in his care.

Passionate about education and the choices and opportunities it gave young people, Frank was also known for helping many students in times of difficulty.

Current principal Ursula McCabe started in Old Bawn CS back in 1991 and she remembers Frank as being a “great man for advice and support”.

“He was very approachable to staff and students and he managed the school with consistency and fairness”, Ms McCabe said.

“The passion he had for the students in Tallaght has been passed down and it is something that is ingrained in the fabric of what we do in Old Bawn.

“Everything we do has the student at the centre, and this was Frank’s philosophy.

“His great presence, his firm handshake and his wise advice will all be sorely missed.

“Thank you Frank, for every thing, may you rest in peace.”

Paul Crone, Old Bawn CS principal from 2008 to 2019, told The Echo that Old Bawn CS is the great school that it is because of the “strong foundations” laid by Frank.

“His commitment, dedication and ferocious work ethic were testament to his character, drive and vision for Old Bawn Community School”, Mr Crone said.

“His ability to put in place structures and procedures that were student centred, many of which are still operating in the school today, ensured each student could reach their full potential.

“On a personal level, Frank’s belief in me, his support and his encouragement will always be very much appreciated.

“At this sad time, Frank will be sorely missed but we can always be confident that his legacy in Old Bawn Community School lives on and has helped shape the conscience of many young people within the Old Bawn Community.”

Stiofáin O Laoire, Principal between 2005 and 2008, remembers Frank as being a “very innovative timetabler” and someone who was “very keen” on using emerging computer logistics programmes.

“We got super-efficient use of our labs and workshops as a result”, Mr O Laoire said.

“He fully embraced the school planning programme being promoted by the Department of Education.

“As a result many staff members including myself took a whole new look at our profession and how things could be better for our students.”

Conor Gill, a woodwork teacher at the school from 1978 to 2016, first met Frank in the late seventies through the Woodwork Teachers Association.

“He was a prominent member and even then, as a very young teacher he was a very well-respected figure within this community”, Conor said.

“I believe his entire motivation throughout his very full and distinguished career was to get the best out of the student and to see the real potential within every student.

“He retired from OBCS in 2005 after 23 years of proud enlightened public service to the community of Old Bawn and Tallaght.

“Goodbye Frank, may you rest in peace.”

Frank was also a great sportsman and a long-time member and mentor of St Jude’s GAA Club.

His former colleagues and friends said he was also a very skilled craftsman with wood and since retirement got great joy in working at his trade and taking part in bowling and choir activities.

Sending condolences to Frank’s family, Ms McCabe said: “Frank had a great enthusiasm for life and made the most of his retirement, spending time with his wife Betty and his adored children and grandchildren.

“For now, we can only offer our sincere sympathy to Betty and his family and express our respect and gratitude for his many years of dedication to Old Bawn Community School.”

Frank passed away on Sunday, April 5, in the care of Tallaght University Hospital.

Due to Government advice, a private funeral will take place. A memorial mass to celebrate Frank’s life will be held at a later date.