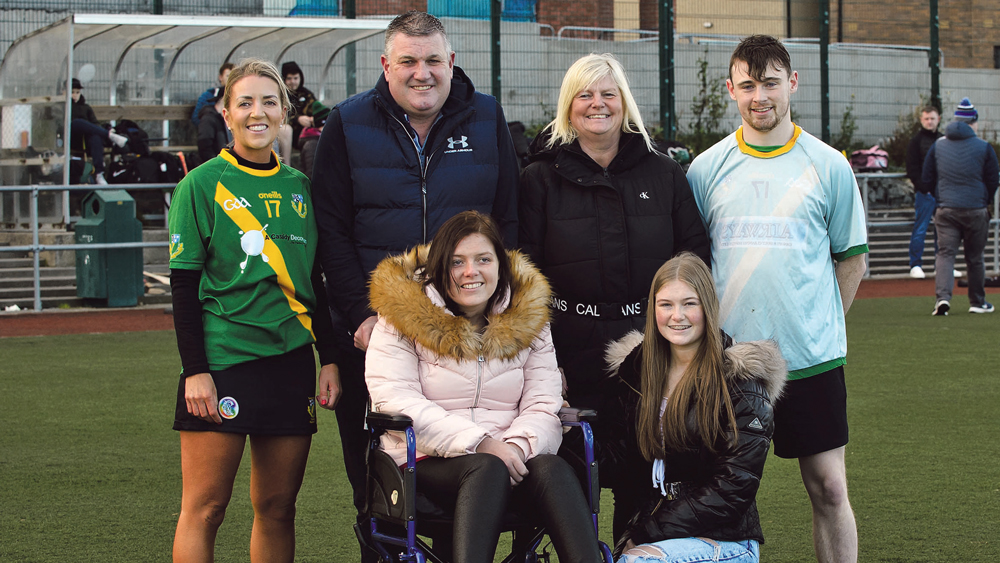 GAA match is a ‘fantastic honour’ in Dylan’s memory

THE father of Dylan O’Neill, who passed away in 2019 aged 21, said it was ‘an honour’ for a memorial match to be held for his son in Thomas Davis GAA Club on New Year’s Day.

MLD typically has a slow progression and can present as progressive dementia, and Dylan passed away after undergoing a bone marrow transplant in a bid to slow the progression of the disease.

Dylan, who was from Ellensborough and was a past pupil of Coláiste de hÍde, was an avid sports fan and played for Thomas Davis GAA Club – and left a lasting impact on the club.

This impact was recognised at the mixed hurling and football match in his memory, which saw a team of over 30s competing against a team of under 30s.

The match was closely fought, with the under 30s narrowly winning the match by a point – and Dylan’s father, Noel O’Neill, was on hand to award a cup in his son’s memory to the winning team.

Noel told The Echo: “It was a very close match, but it was very good. There was a really good turnout, everybody was in really good form.

“A lot of lads that Dylan would’ve played with over the years played in the match. It was a brilliant atmosphere.

“It was one of those things where it didn’t matter what team won, just having the match in his memory was a fantastic honour.”

Dylan’s immediate family, including his parents Noel and Sandra and his sisters Serena, who also has MLD but her condition has stabilised, and Natasha, who plays for Thomas Davis, were in attendance at the match.

“It was a really emotional day for all the family,” explained Noel. “On a day like that, when it’s for your son, you’d rather it wasn’t happening, I just wish he could’ve been there to play the match.

“But it was a fantastic day to remember him and the match will only get bigger.

“From myself, my wife and my family, we just want to let the club know how grateful we are to them for everything they’ve done for us over the years, and long may this occasion go on in Dylan’s memory.”

The chairman of Thomas Davis GAA Club, Liam McGuigan, said Dylan was a popular and well-liked member of the club who is deeply missed.

“Dylan had been playing for the club since he was four- or five-years-old,” Liam told The Echo.

“He was very likeable and funny, and he was always in a cheery mood. He’d a great rapport with everyone in the club. He’s a young man who’s terribly missed.”