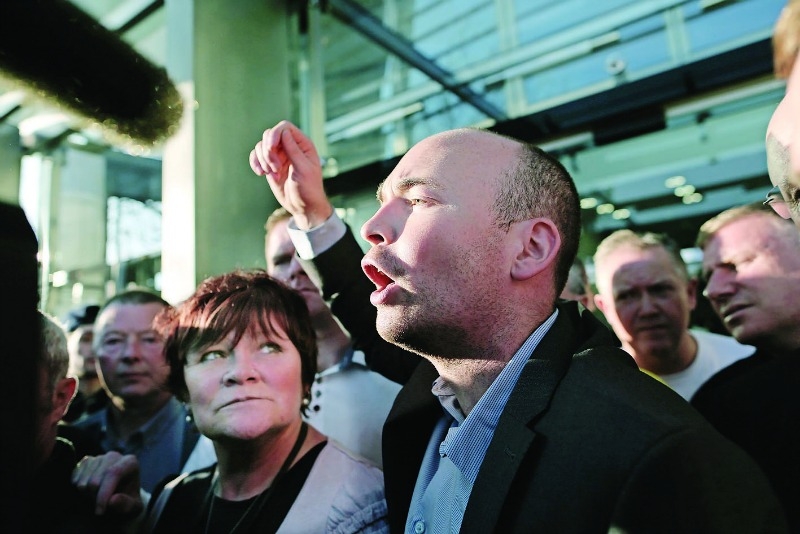 Solidarity TD Paul Murphy and Councillor Michael Murphy are “intelligent men” who “should have just walked away” from the Jobstown anti-water charges protest, a garda has told their trial.

On day 21 of the trial of Mr Murphy, Cllr Murphy and five other men, the jury was once again shown video footage in which a vote was taken among protesters on whether to “keep” former Tánaiste Joan Burton or march the garda car containing the minister out of the area.

The seven men deny falsely imprisoning Ms Burton and her aide Karen O’Connell by restricting their personal liberty without their consent at Fortunestown Road, Jobstown, Tallaght on November 15, 2014.

The two woman were allegedly trapped in a car outside a local church and subsequently in a garda jeep for up to three hours by a crowd of water charge protestors after they had attended a local graduation ceremony.

Today in Dublin Circuit Criminal Court, Detective Garda Richard Hansen was shown footage which showed Paul Murphy asking the crowd to vote on whether to keep Ms Burton or march her out of the area.

Councillor Michael Murphy told the crowd there was “potential for argy-bargy and that’s not what we really came here for”.

Another man in the crowd responded by saying, “That’s what we came here for,” Seoirse Ó Dúnlaing BL, representing Michael Murphy, told the court.

The two men voted to march Ms Burton’s car down Fortunestown Road, but the majority of the crowd voted to keep Ms Burton there.

Det Gda Hansen said he thought the footage “clearly demonstrates that both Paul Murphy and Michael Murphy were in control of the crowd”. He said the men had the loud hailer and were “putting options to the crowd”.

“This had become more than a protest. It was a violent situation. It was nearly a riot in my opinion,” Det Gda Hansen said.

Mr Ó Dúnlaing put it to Det Gda Hansen that he made no mention of Michael Murphy in his garda notebook.

He also put it to Det Gda Hansen that he reviewed CCTV footage while making his statement and that whenever Cllr Murphy’s name appeared on his statement, it was “predated with you viewing footage.”

Det Gda Hansen said he viewed the footage “to ensure I was identifying the correct person”.

Earlier, under cross-examination from Sean Guerin SC, representing Paul Murphy, Det Gda Hansen was shown footage in which Paul Murphy was seen sitting on the ground in front of the car with his arms folded.

Mr Guerin put it to Det Gda Hansen that this was “passive resistance” and “obstructive rather than hostility and aggression”, but the witness disagreed.

“My firm belief is that by obstructing this vehicle from moving forward, it was an act of aggression,” Det Gda Hansen said.

He added that the consequences from that day “could have been so much more serious if gardaí hadn’t acted in the way that they did.”

Det Gda Hansen also told the court that at one stage he heard Paul Murphy saying, “They have no more coming. We’ll stop it here.”

He said he took that to mean Mr Murphy was saying there were no more gardaí coming and they should stop the jeep at that location.

“Could he not have been referring to stopping the protest?” Mr Guerin asked.