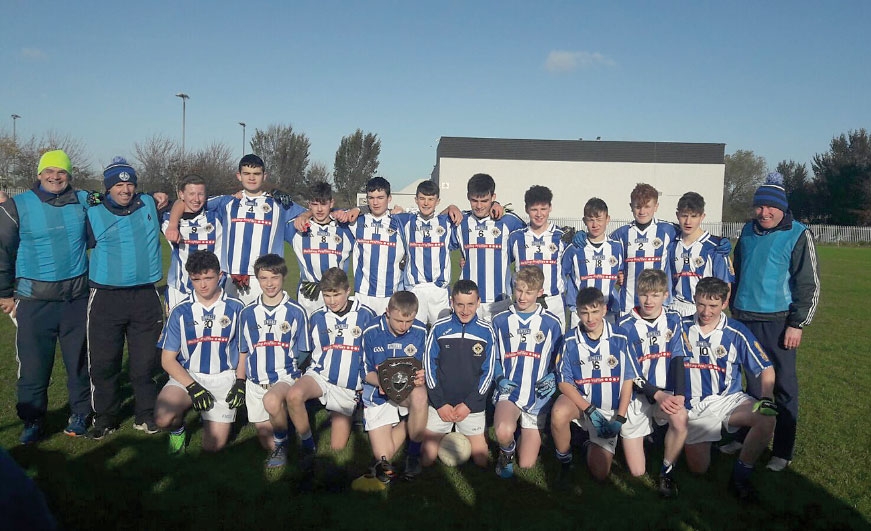 Great weekend for Boden Under 15s

IT WAS a great weekend for Ballyboden St Enda’s Under 15 footballers as they captured both the ‘C’ Shield title and progressed to the ‘D’ Shield decider.

The former emerged 0-6 to 3-6 winners over Ballyfermot DLS in the final at Gurteen Road last Sunday.

Indeed they inflicted the bulk of the damage in the opening half, hitting a goal and six points while keep-ing their hosts scoreless during this period.

Jack Coyle found the back of the net and also struck over the bar with Charlie Brady and Sean Murphy also tagging on points.

And they made a blistering start to the second half thanks to a goal from Kevin Hickey after which Ballyfermot hit three points on the trot.

Yet Ballyboden were not about to allow their opponents a way back into the running and served up another later goal, this time through Eoin Duignan who prevented Sean Murphy’s strike from going out of play, before chipping the netminder.

Timmy Cleary, Eamon O’Brien and Sean Murphy all struck over for Boden while Oisin King was superb in the halfback line and Cian Tobin was solid in goal for the winners.

Beaten in the first round of the championship by Ballinteer St John’s, the team has made the most of their Shield campaign, beating St Vincent’s and Kilmacud Crokes on their way to last weekend’s decider.

Meanwhile, the Ballyboden Under 15Cs are just one step away from emulating this achievement having reached the ‘D’ Shield decider where they will come up against St Sylvester’s this coming Sunday.

They edged out Cuala 4-4 to 3-6 to advance to the decider, Luke O’Hanlon and Sean Bury among their goalscorers with Conor Casey serving up the winning points late on.

It was a great victory for the Firhouse Road club especially when considering the fact they were five points adrift of their opponents at the halftime break.