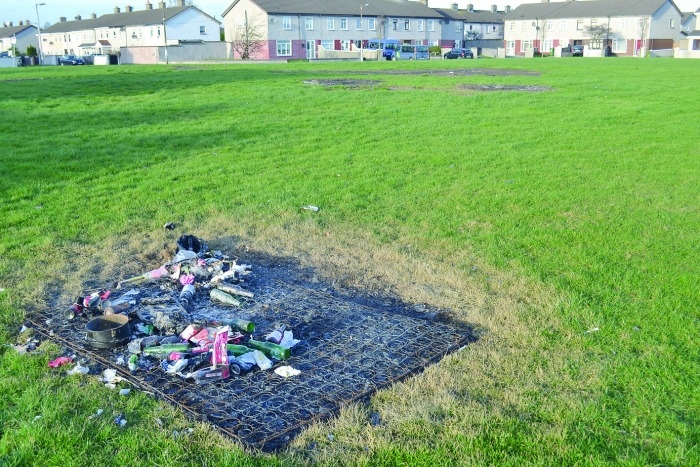 THE continuous dumping and burning of rubbish on a green space in Rossfield is not only destroying the environment, but the air quality for residents, who are forced to keep their windows closed due to toxic fumes coming from the nightly fires.

The dumping and burning of rubbish on the field beside Rossfield Close and Rossfield Park has been ongoing for some time, with the illegal dumping of household waste being a nightly occurrence.

According to local reports, the dumping is escalating, with people from outside the estate also using the green-field site as an illegal dump.

This week Tallaght South Sinn Féin councillor lodged a motion with South Dublin County Council, which asked for the dumping to be investigated with a view to bringing the culprits to court for anti-social behaviour.

Cllr King said: “The rubbish is being set on fire by the people responsible for dumping it, so that there is no evidence left.

He added: “There is a very small few engaged in this dumping from within the estate and now there are people coming from outside the area because no action is being taken.

“I have asked the council to redouble their efforts in combating this problem which has escalated and will continue to grow if something isn’t done.

“We need to deter these types of dumping and bring people to court for their actions.

“The council has to find a solution, it’s a health and safety hazard for residents, and hopefully we will be able to introduce covert CCTV to help identify the culprits.”

Cllr King has also asked members of the community to contact him or the council if they have any information that may lead to the identification of the serial dumpers.

According to South Dublin County Council, the Enforcement and Licensing Section received 23 complaints in 2016 for illegal dumping in Rossfield, which resulted in five fines and three warning letters/notices regarding illegal dumping only.

The council said: “It is understood that there have been repeated incidents of burning in this area and in many cases it is believed that the identity of those responsible for illegal dumping and burning of waste is known.

“However, in the absence of clear and substantive evidence, or witness statement and the presence of such witnesses in court, it is not possible to bring successful prosecutions.

“Therefore we continue to encourage residents and the public at large to support the council in efforts to identify culprits where/if known, and to provide the necessary information to assist in getting more cases of illegal dumping and burning of waste into court.”

Cllr King’s motion for an investigation into the dumping and burning of waste in Rossfield was passed by council members.

NEWER POST“I love being able to give back to my community and doing something positive”
OLDER POSTEcho Letters: Career criminals need to be jailed for longer time