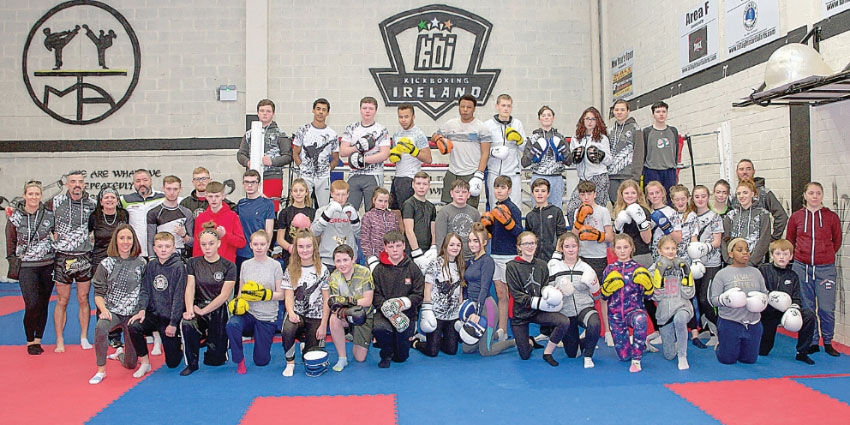 DEFUSING conflicts between rival teenagers in the community is among a range of issues that have been tackled through an award-winning programme in West Tallaght.

KICK (Kickboxing to Inspire and Challenge Kids) was piloted in Brookfield Youth and Community Centre in 2016, and has expanded to numerous other clubs in Tallaght and Clondalkin.

The free 12-week programme is targeted towards kids aged 12-17 from disadvantaged areas.

It combines training with pro-social behaviours, and has an extremely high retention rate.

“Each week has a different theme,” said Flynn.

“It is a 50/50 programme between education and physical. The awareness stuff is about getting them to appreciate where a vulnerable kid in school may be coming from.

“Another thing we emphasis, is to tell them did they know you can get three years for carrying a knife. Most don’t know that.

“We get them to do a small obstacle course, and then a second time around with beer goggles. The message is your body is a performance vehicle, and if you want to be great, don’t put petrol in a diesel tank.”

O’Shaughnessy has a background as a project co-ordinater for marginalised children and families.

Both are from Tallaght and proud of the impact the non-profit programme has made, with its high retention rate and community awards.

Kids in KICK can continue to do further training or education after the 12 weeks, or become trainers of the programme in paid employment.

The programme currently has 25 young mentors who have trained to become mentors themselves, to other at-risk youths.

“Parents love it. The change (children’s behaviour) is the best part of the job,” said Flynn.

“The non-monetary value is through the roof. I’ve had parents of kids with autism say their son has your sayings up on the wall in his bedroom. A room he wasn’t even leaving prior to doing the programme.

“It’s not a kick-boxing club, but half of the activities are martial arts. Fighting isn’t for everybody. With this, there is a place for everybody. Kids love responsibility. Some have gone on to study sports science or psychology.”

Flynn is firm in the assertion that youths in the programme are not to use this for harm on the streets.

“They know if I hear anyone has been using training for anti-social behaviour, they are gone,” he said.

“As a result, you have situations where kids from Fettercairn and Glenshane, who are both involved in KICK, can become friends.”

Since it started in 2016, hundreds of kids have benefitted from KICK, and it has been taken on by other martial arts clubs in Tallaght and Clondalkin, with plans for expansion outside Dublin.

On Sunday, there was a ceremony for the latest KICK graduates.

They are currently enrolling for the next KICK programmes in 2019. Teenagers from Tallaght and Clondalkin can sign up on www.kickireland.ie