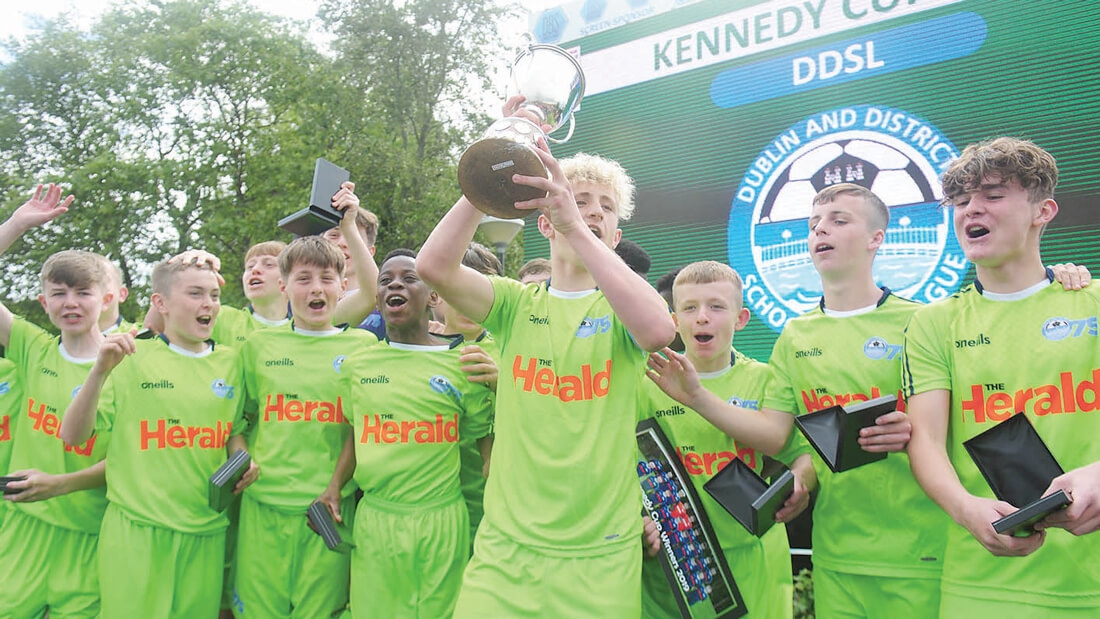 LOCAL players helped Dublin and District Schoolboy League squad to a 33rd New Balance Kennedy Cup title as they beat Mayo 2-0 at the University of Limerick on Saturday.

Shamrock Rovers’ playmaker Kevin Zefi wreaked havoc in the final, getting on the scoresheet early on to help see the DDSL lift the prize for a fourth year in succession

It was Zefi who drew first blood in the decider when he closed out a nice team move to unlock the Mayo defence, with his first touch taking him around the keeper and his second slotting the ball into the bottom corner.

The second goal came just before the break when James McManus controll-ed a Mayo clearance just inside the box, burying it  on the half-volley.

Sam Curtis, another Rovers player, captained the squad to the cup, bagging three goals  throughout a tournament that saw his finish the group stage with 19 goals and none conceded.

Although he did not start in the first game, Ballyfermot native Alex Power was a predominant component in maintaining clean sheets for the remainder of the tournament which a series of fine displays between the sticks.

They beat Athlone, Drogheda and Kilkenny to fly through the groups and set themselves up nicely for an all-Dublin tie in the quarter-final.

North Dublin Schoolboys/ Girls League could not withstand the firepower that the Rover’s players brought to the DDSL panel with Curtis, Zefi and Ferizaj all scoring in a 4-0 triumph.

The semi-final encounter with Longford proved another smooth game with Cherry Orchard’s Divine Izekor and Callum Wynne both netting to propel their side through to the finale.

Speaking to the SFAI after after their final win over Mayo, DDSL captain Curtis said “Great achievement for the boys. Everybody has been working hard to get here and we’ve done it.