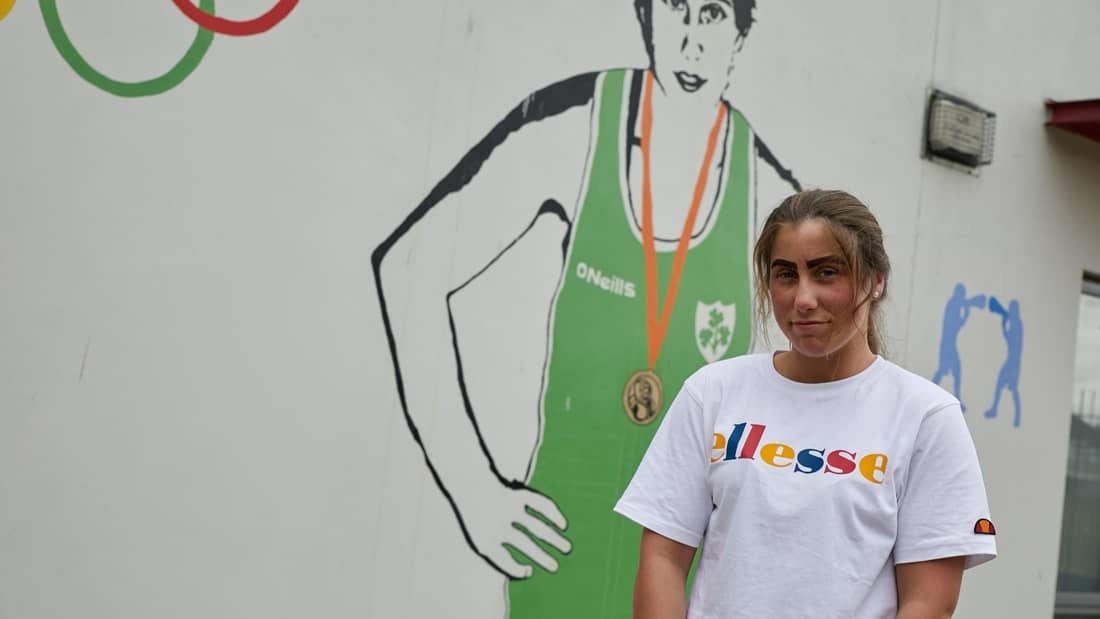 Winnie Christina McDonagh stepped into Neilstown Boxing Club when she was 10 as a result of being bullied about her weight.

It was 2014 and she had no plans to stick around, just wanting to spend a few months there to shed some pounds.

Wnnie is an explosive southpaw (All images: Aidan O’Neill)

In the six years since, the Clondalkin native has built up an impeccable record in Ireland winning a national boxing title in every year she has competed in – totalling six.

“I wasn’t planning on sticking around, it was just about losing the weight and then I fell in love with the sport,” Winnie tells The Echo.

“The atmosphere of the place. Everybody is there pushing each other.

“We’re all on the same journey, just different paths.

“My ambition is to just keep boxing because it’s something I’m really focused on, I want to go to the Olympics in 2024 and hopefully get a medal.

“I don’t want to get married or anything like that because it all stops then.”

It is Traveller tradition that girls marry young with the blessing of their parents, but Winnie, 16, has her eyes set too firmly on boxing to think about settling down.

“See if I was to get married, I won’t be boxing anymore and I’d be expected to be doing all the cookin’, having babies, watching the babies, cleaning, and staying at home,” Winnie explains.

“I want to change everything for Traveller girls.

“You don’t have to do all these things, staying at home and all, while the husband goes out.

“You go out there and get a life for yourself you know?”

Asked if she had plans to get married down the line or if the question came up if she would consider the proposal, Winnie says half-joking: “Well it hasn’t happened yet, and I’m not accepting them, so no.

“I made a promise to my coaches a few years ago that I wouldn’t get married and I plan on sticking by the promise.

“It’s not even in my head to get married – I’ve no interest in it – and I’m focused on my boxing.”

Although she is 16 and would be coming into the senior cycle of the state examinations, Winnie says: “I don’t have the time to be doing the Leaving Cert, I know I want to box, so I’m working at that.”

An explosive southpaw, Winnie describes her style in the ring as being “more of a fighter than a boxer” who is not afraid to take the shots if it means she can return fire adequately.

Winnie has her sights set on the 2024 Olympics

An average week for Winnie would see her train Monday, Wednesday and Thursday in the gym before doing roadwork on the weekends.

But since all boxing gyms shutdown as a result of the Covid-19 pandemic, Winnie has been going to her grandfather’s shed to work on the heavy bag for half-an-hour, skip for the same period of time and run for another half-hour.

Under coaches Gerry Fleming and Hughie Smith in Neilstown BC, Winnie has flourished, reaching the heights winning a gold medal at the European Schoolgirl Championships in 2018.

Last year, Winnie was named The Echo’s Emerging Athlete of the Year after she picked up The Echo Sports Star of the Month Award for June, for fighting her way to a silver medal in the Women’s 63kg Final at the Junior European Championships.

Although she started boxing late, she has taken to the sport of boxing naturally and has had a rapid rise in just six years.

“My coaches never knew I was being bullied when I started, they just thought I was a bit quiet or whatever,” she details.

“It wasn’t until three years into it when I told them and they always say to just look where I am now – six-time national champion, European gold medallist and silver medalist.”

Winnie qualified, before the shutdown of the sport, for the Junior Europeans in what would have been her final year in that category before moving up to Under-18 cadets.

The competition could still go ahead, but there is still a level of uncertainty surrounding it.

One goal still remains for Winnie.

“If I medal at that, if I get a gold, I’ll go straight into pro boxing after it.”

The road to Paris 2024 has begun for Winnie and should she qualify, she would be just 19-years-old when the Summer Games kick-off.