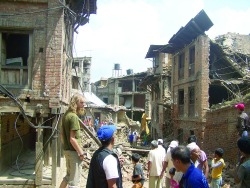 Lucan man urges Irish not to forget Nepalese in need

process has begun – with Lucan man Fachtna ‘Doc’ Clandillon urging Ireland not to forget those still in need.
Speaking from Nepal, Doc highlighted the importance of keeping the people of Nepal in the thoughts of the world with aid and support still badly needed in many regions.
With other events hitting the headlines, the Lucan father-of-two is worried that the support and concern in the immediate aftermath of the earthquake will disappear.

He said: “Some of the worst hit districts are still way behind, some of the statistics are frightening – Dolakha District had 70,000 houses, 69,000 have been fully or partially destroyed. The time for rebuilding is here, but the relief efforts are still very much ongoing in the hardest-to-reach areas.
“Our office is gone, our school is gone, Dhurba’s house in Nagarkot is gone, as well as the houses of most of our committee. Good friends of mine have been sleeping under tents and tarpaulins with their families and neighbours, up to 30 people sharing a small space to cook and sleep in.”
Nagarhope has been helping out with the aid effort – both in Nepal and Ireland – by distributing rice, oil, salt, foam matting, tarpaulin sheets and other essentials to families.
The organisation is also helping to rebuild where possible with volunteers, including Doc, busy in Sathikurya village where the school was damaged.
Doc said: “We all camp out in tents and share food together, and spend our days shovelling, lifting, cutting trees and bamboo, tidying, resting, and every other thing imaginable to get the school open in time.”
Many areas are still without electricity and people are forced to sleep in tents and tarpaulins with family and neighbours – sometimes up to 30 people sharing a small space – because of the destruction caused by the earthquake.
Doc said: “This will not be over after three months or six, this is a concerted long-term effort on the part of those who have shown an interest. I, and both our committees in both Nepal and Ireland, want to thank [people] for the support and generosity they have shown.”
This week residents in Hillcrest will hold a door-to-door collection for Nagarhope while many residents took part in the Women’s Mini Marathon to raise money for the cause.
Anyone who would like to donate can do so on the website www.nagarhope.com or by using account name Nagarhope, BIC – ULSBIE2D, IBAN – IE30ULSB98604010122317.