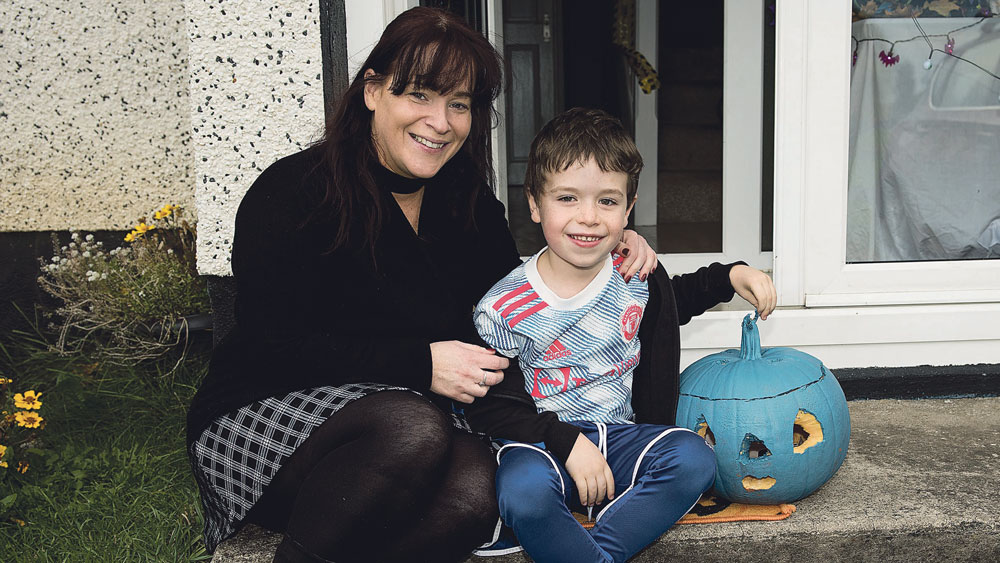 A SIX-YEAR-OLD boy with multiple food allergies is painting a pumpkin teal for his home to raise awareness for trickor- treaters this Halloween.

Originally started by food allergy organisation FARE, The Teal Pumpkin Project is a way to make trick-or-treating safer and more inclusive for children living with food allergies and intolerances.

Six-year-old Matthew Stynes from Kingswood in Tallaght is allergic to peanuts as well as all other nuts, sesame seeds and sunflower seeds.

This Halloween, Matthew will be painting a pumpkin teal, the official colour of food allergy awareness.

Putting a teal pumpkin on your doorstep means you have non-food treats available, such as glow sticks or small toys.

“Matthew has had the allergies since he was young and we found out very early,” Matthew’s mam Laura told The Echo.

“When he goes trick-or-treating at Halloween, we would usually only go to the houses around us that would know about him.

“I then do a ‘switcheroo’ with him, so whatever he is collecting his food in, I would have the same one and fill it with ‘safe foods’ and I would switch it then so he wouldn’t know, just because if you are going to houses you don’t know you don’t want to be saying to people ‘don’t put a monkey nut in there!’”, explained Laura.

According to Allergy Ireland, 1 in 50 children have a life-threatening nut allergy, apart from other food allergies and 10 per cent of children and young adults have more than one allergic disorder.

Despite the cautious approach Laura takes to ensure Matthew is safe, on Halloween 2019 he suffered a reaction due to a possible contamination of one of the ‘safe foods’ he ate.

“He could have something that is safe for him but if there is any contamination there is nothing much you can really do,” said Laura.

Due to his allergies, Matthew always carries an adrenaline pen with him which are used for the emergency treatment of severe allergic reactions, such as anaphylaxis.

“They are called adrenaline pens.

EpiPens, which many people know them as, was because Epi was the first manufacturer of these adrenaline pens,” Laura explains.

They are the same but with the EpiPen you administer it ‘sky to thigh’ and has a blue safety cap that you hold to the sky and jab, but the Jext pen has a yellow cap, and you only place it on to the thigh, you don’t jab it, you just press it.

“Is it very important to know because although they are the same thing that is in them, they are administered differently.”

Laura explained that despite allergies being so common in children, it is still something that needs more awareness especially at a time like Halloween.

“Even if someone opens a bag of peanuts and the dust comes through the air, that can cause a reaction and that is why they are banned now on planes,” she added.

“I have a lot of anxiety about Matthew and his allergies which I share a bit on Instagram.

“It is just about having that education and getting the word out there about it.”