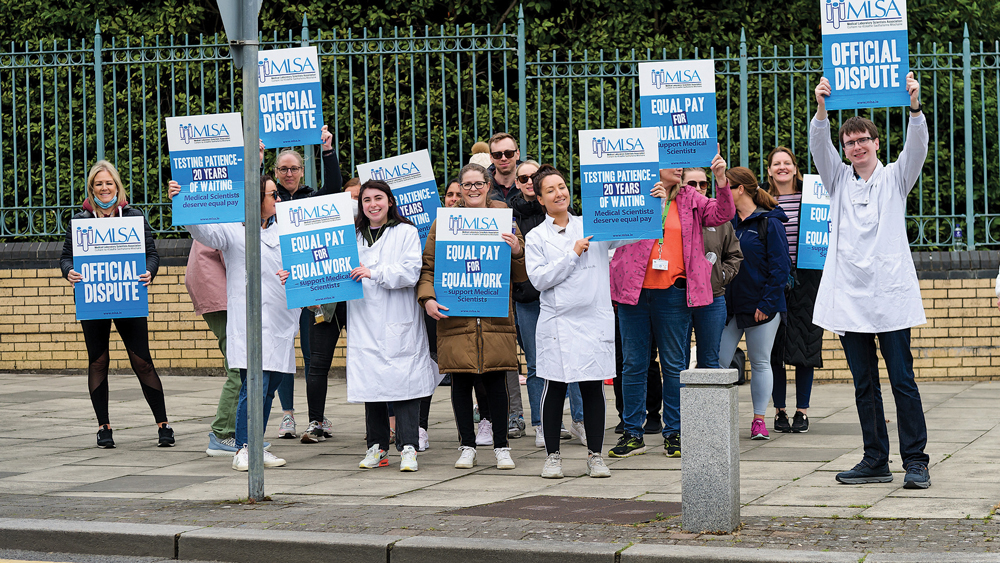 MEDICAL scientists have suspended their planned industrial action today, Wednesday, May 25, to enter into “exploratory talks” with the HSE and the Department of Health in the Labour Court.

It was to be the second industrial action taken by medical scientists, after they downed tools last Wednesday, May 18, for 12 hours.

Medical scientists in Tallaght University Hospital formed a picket line outside the hospital last week and again on Tuesday as part of national industrial action.

The union representing medical scientists, the Medical Laboratory Scientists Association (MLSA), organised the action as it said there was a severe recruitment and retention problem which has been ignored by the HSE and Department of Health.

However, the workers’ planned strike today was suspended, after they accepted an invitation to attend the Labour Court for exploratory talks on the dispute.

The Labour Court intervened in the dispute yesterday, inviting both parties to engage in a process which will commence today.

Both the Medical Laboratory Scientists Association (MLSA) and HSE and the Department of Health have accepted the invitation.

As a result, MLSA issued a notice to all of its 2,100 members on Tuesday evening to suspend further industrial action planned for today, and to resume work as normal this morning across all hospital laboratories.

MLSA general secretary Terry Casey said the union will enter the Labour Court process in good faith and with a commitment to resolving the severe recruitment and retention issues in the laboratory sector.

“The MLSA’s Executive Committee met this afternoon and has agreed to accept the Labour Court’s invitation,” he said.

“We will remain focused on what is required to achieve a sustainable work structure for medical scientists, patients and the Irish health service.”