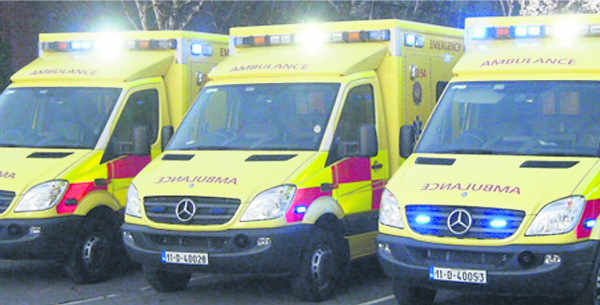 No ambulance available for teenage girl having seizure

A YOUNG teenage girl who suffered a seizure, was waiting over three hours for an ambulance to transfer her from Our Lady’s Hospital to St James’s.

Megan Desmond (16), was struck down by a seizure at the family home in Ballyfermot on February 22.

The teenager was the victim of a serious assault last year. Her mother Laura Desmond attributes the seizure to post-traumatic disorder, arising from the attack.

Laura, a mother of four, said: “That day, she said she thought she was going to have a seizure. I put her on the floor and called my partner down. She never had a seizure before. It was a big fright for us.

“We called 999, they said an ambulance was 10/15 minutes away. They asked us to check for vital signs, and time her breathing. After some minutes, with no sign of an ambulance, my partner rang 999 again, and was told by the same person that there was none available,” said Laura.

“He (the dispatcher) said he told us that the first time we called, but that’s not the case. We have two cars at the house, and would have driven her to hospital straight away and not wasted time.”

Megan was brought to Our Lady’s Hospital in Crumlin in their car – cradled by her frantic mother and father. The other children were cared for by her mother.

Laura continued: “We proceeded – on automatic pilot – to the Children’s Hospital. She had the seizure all the way from Ballyfermot to Crumlin. It was very scary.

“They got her on a trolley, and administered something to calm her down. They decided because Megan is 16, to transfer her to St James’s. My partner had gone home at this stage (9.30pm) to look after the other kids.We were told we would have to wait for an ambulance. That took another three hours.”

Arriving at St James’s at 12.30am, it wasn’t until 4.30am that Megan got a bed, where she stayed for a week, and undergoing tests.

Laura, continued: “I thought St James’s would be packed due to wait for ambulances, but there were only four people in A&E. A neighbour who works there, said it was one of the quietest nights in 20 years.

“Megan had MRI and EEG tests and was given the all-clear. She was put in a ward with three grown-up men for four nights, which was not ideal.”

St James’s spokesperson says the majority of wards are mixed, but they strive to ensure that all patients are looked after appropriately and comfortably.

Megan is since out of hospital, but has missed days at St Dominic’s Secondary School, as she recovers.
“She suffered a seizure again, and went to the GP, but she doesn’t want to go back to the hospital again,” said Laura.