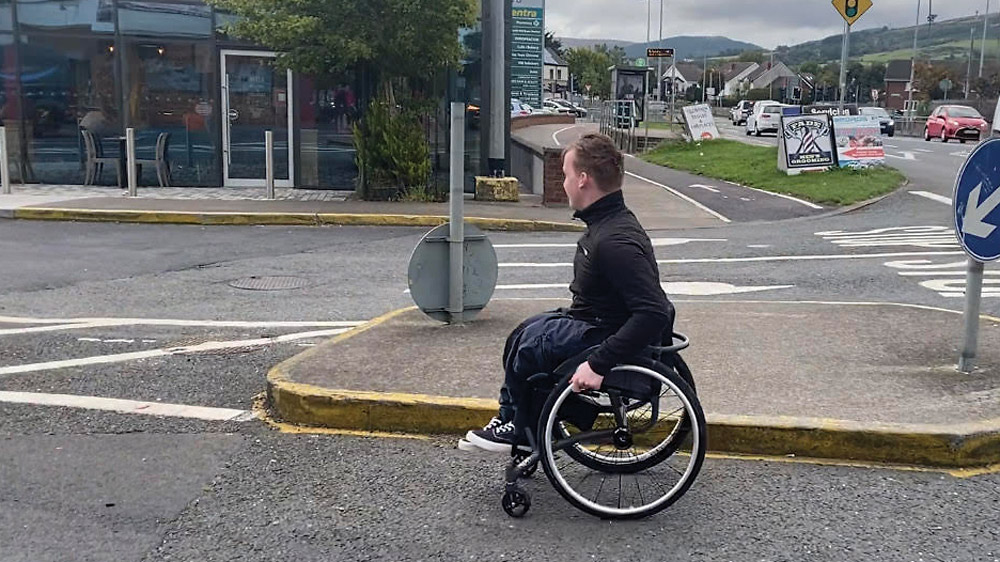 TALLAGHT Village and the junction at the Old Bawn Shopping Centre have been highlighted as areas that are particularly difficult for people in wheelchairs and using mobility aids to navigate.

The issue of accessibility in the Tallaght area was recently raised by Tallaght Community Council’s (TCC) inclusion officer, Sinead Tighe.

Sinead recently interviewed Oisin Putt, a para-athlete who studies at TUDublin Tallaght, at the Old Bawn Shopping Centre to go through the obstacles he faces when going to college.

While they were at the shopping centre, a lack of accessibility was readily apparent when Oisin encountered a raised traffic island between three lanes of traffic at the busy shopping centre.

“For wheelchair users, the main issue is that junction at Old Bawn is not safe,” Sinead told The Echo.

“There’s a lot of traffic there, and I think they do need to look at putting something else there, like traffic lights.”

This meant Oisin had to stay on the road between the three lanes of traffic behind the traffic island, and this is one of many instances of problematic street design that he has encountered.

He said the narrow footpath at the Permanent TSB in Tallaght Village is difficult for him to navigate, as is poorly placed street furniture.

“Not only are there cracks in the road and dents in the road from it being weathered and not maintained properly, but there are also things that I end up tripping over or falling out of my chair because of them,” he said.

“There are also a lot of bins being knocked over and a few other different obstructions there that I find very difficult.”

These obstructions include narrow footpaths, bins that are placed on footpaths causing an obstruction, and low-hanging branches.

Sinead is also acutely aware of the issues these obstructions pose as her son, Daniel, who has a rare genetic condition, is a wheelchair user.

“With the village being so old, it’s not an area I go to with Dan because I find it very hard to navigate,” she explained.

“The paths are quite narrow, and you’re walking up with cars passing on the road beside you.

“When we look at the new areas being built, like up in Jobstown there’s a whole new pathway…it’s just about seeing how we can bring the village up to that standard.

“And this isn’t about being negative to the council workers – this is just the way that Tallaght has developed.

“I think we haven’t progressed accessibility to be part of the village in a safe way, and I think that needs to be looked at.”

TCC have raised these issues with South Dublin County Council in recent weeks, where they also highlighted the “isolated” pedestrian lights opposite Macari’s and traffic/parking issues in the village that cause additional obstructions for wheelchair users.

A spokesperson for South Dublin County Council told The Echo: “We are aware of the parking on the double yellow lines and on footpaths and have requested the traffic wardens to issue fines when in the area.

“The Gardai as the traffic authority also have a role to play with regard to breaches of the Road Traffic Legislation in our towns and villages.

“Some of the footpaths are in private ownership and that is a matter for these owners.

“I will request our Maintenance Section to examine footpaths in our charge to see if there is anything that can be done.

“With regard to the litter bin beside the TSB Bank, this matter has been referred to our Public Realm Section to investigate and reallocate if possible.”