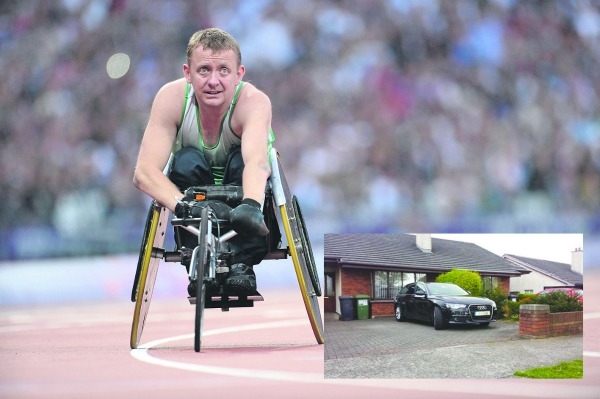 Paralympic athlete relieved to be re-united with his stolen car

PARALYMPIC SILVER medalist John McCarthy, whose specially adapted car was stolen outside his house by heartless thieves between last Sunday night and Monday morning. is hoping to get his car back today.

John who lives in Abbeywood in Lucan, and whose car forms an integral part of his lifestyle, had his Audi A6 estate specially adapted for him with special steering wheel controls. It was found on Tuesday morning in Adamstown undamaged.

When The Echo spoke to John yesterday, he had still yet to get the car back.

John told The Echo: “They took the keys and I didn’t get them back. So the locks have to be changed.

I hope to get the car back tomorrow. They broke into my house somewhere between Sunday night and Monday morning and took the keys.”

On Monday he put a post up on Facebook and the story just took off. He was on radio with Dave Fanning and the story was in every newspaper before the car was found on Tuesday.

John said that he doesn’t know if it was because of the social media campaign that the car was returned.

He said: “I don’t know whether it was social media. Did they feel guilty? I would love to know.”

John’s training regime to qualify for the Rio Paralympics has recently been hampered by illness, so the events of the last two days did not help.

He said: “I’m only coming back from illness. I managed to get out training yesterday and I hope to get out later.”

There is an event at the weekend but John does not yet know if he will be competing. He has until June to qualify for Rio in the T51 100m and T51 400m.

He also competed at London 2012, reaching the final of the 100m wheelchair sprint and finished seventh in his new discipline.

John says that he is glad to get his car back as his training plans could have been really hampered without it.

He said: “The relief of getting the car back is great. Getting a replacement car would have been weeks of more hassle as it would have to be adapted . Now I’m just taking it day by day.”