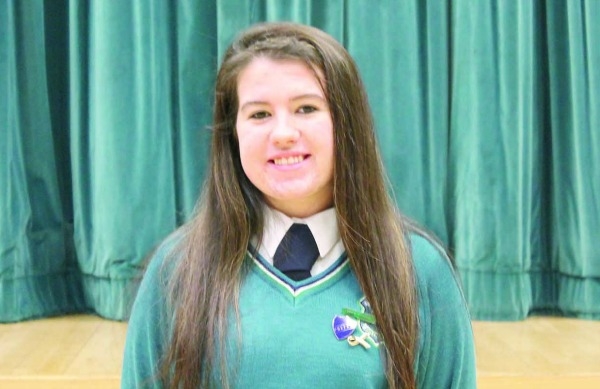 Popular Emma in running for Spirit of Community Awards

A YOUTH volunteer from Walkinstown is set to go to the All-Ireland final of the 2016 Pramerica Spirit of Community awards, which rewards post-primary students for outstanding acts of volunteerism and the positive contribution they make in their local communities.

Seventeen-year-old Emma Moriarty, a student in St Paul’s Secondary School in Greenhills, is one of 20 finalists in the competition after organising a variety/talent show called “Talentfest” to helped raise thousands of euro for Make-A-Wish Foundation.

Emma’s teacher Tracy Weldon put her forward for the award and said: “Emma is a hard-working and diligent student. She is the epitome of ‘school spirit’ and is always willing to give freely of her time and talents in order to enhance school life for her fellow students.

“She is a very well-known and popular student as she is involved in so many clubs, societies and events in the school community.”

Emma has been teaching dance to children with cancer since 2012, and has worked with The Childhood Cancer Foundation, Laura Lynn Foundation and Barnardos.

Due to her place in the final 20, Emma will be presented with €500 and an engraved silver medallion on March 10 at a gala awards ceremony in Lough Eske Castle Hotel and Spa in Co Donegal, where she will also get to meet musician Niall “Bressie” Breslin.

If Emma is chosen as one of the two All-Ireland Youth Volunteers, she will receive €1,000 for a charity of her choice, a gold medallion, a crystal trophy for her school and an all-expenses-paid trip to the United States in May to participate in the international Prudential Spirit of Community Awards.

Speaking to The Echo, Emma’s mother Paula said: “I can’t believe it, it really is amazing. Emma is just delighted with the honour.

“It all started when Emma joined a dance class and there were children brought from the cancer ward in Our Lady’s to take part.

“She became close to one of the children and decided she wanted to put on a show for them all.

“She spent the entire summer holidays from school organising it, getting a licence, booking a venue and even spent her two week’s holidays in Lanzarote putting together the programme.

“Sadly, the child she became close to passed away, but before she did their family sent Emma a lovely email about how she put a smile back on their child’s face that they never thought they’d see.

“Emma really loves doing this, and she would love to win the award but that isn’t really what matters to her. She’s just delighted to be nominated.”