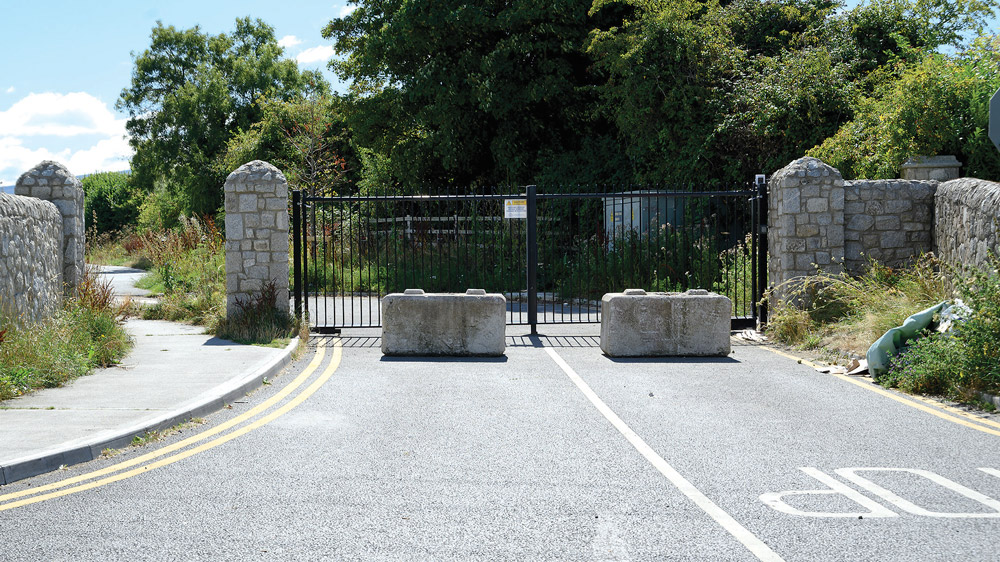 Gates still locked and no sign of further development

A PARK nestled in the foothills of the Dublin mountains which was once described as “one of South Dublin County’s hidden gems” by the council has been left to “wrack and ruin” according to a resident.

However, in an update this week, the local authority has offered an insight into how the project is coming along – with plans to remove the barriers to the new car-park soon.

The first phase of works at Kiltipper Park, which also aided in delivery of a section of the Dodder Greenway, commenced in August 2019.

These works consisted of a shared pedestrian and cyclist route, landscape planting and rejuvenation, car park construction with a new entrance and sustainable drainage system (SuDS) along with toucan crossings, public lighting and “traffic-calming” measures.

According to a report issued to South Dublin County Council in July 2020, a 30-space car-park was constructed to prevent road-side parking.

A public consultation commenced in the summer of 2020 for the next phase of the enhancement project which includes a GAA pitch, soccer pitches, a children’s playground, additional parking, and linear natural play areas.

However, a resident who lives adjacent to the park, claims that it has been left to “wrack and ruin” with the gates still locked, lack of upkeep of the amenity, and no sign of further development.

“I live right across from Kiltipper Park, it’s a fabulous amenity right on our doorstep,” says Kiltipper resident Hazel McGrath.

“The council started work on this before Covid and then that brought it to a halt, and they still haven’t opened it. It’s an absolute disgrace the way it’s been left.

“Every so often they’ll go in and do a bit of work on the car-park, then they just let it go back to wrack and ruin. So, people end up parking all over the road and it’s unsafe.

“I met a lady in the park the other day and she says to me that she only goes for little walks with the dog because she’s afraid to go far into the park.

“She says, ‘the grass is so high, you don’t know if somebody is hiding in it or not’. The grass is so bad, it went on fire there a few weeks ago and the fire brigade couldn’t get into it because the gates are still locked.

“It’s the same if there was an accident in there, nobody would be able to get to them.

“It is a fantastic amenity for people, but they come up a few times and then they give up on it because there’s no car-parking.

“If this was in Blackrock or Templeogue it would have been done by now, but because it’s Tallaght, it’s like the council don’t care.”

Although, when these concerns were raised with South Dublin County Council this week, they stated that “the detailed design of this [Part 8] phase of Kiltipper Park project is currently underway”.

In relation to the barriers in front of the constructed entrance and locked gate to the car-park, which was constructed in 2019, the council also offered an update.

“The contractor is on site this week within the car-park; they will remove the barrier on completion; this will likely be before the weekend, or next week at the latest,” a spokesperson told The Echo.

When asked if there is regularly planned maintenance of the amenity at this present stage, the local authority gave a run-down of its scheduled onsite maintenance.

“The meadow-mowing regime is reviewed each year to ensure the ecology of the area is protected and enhanced.”