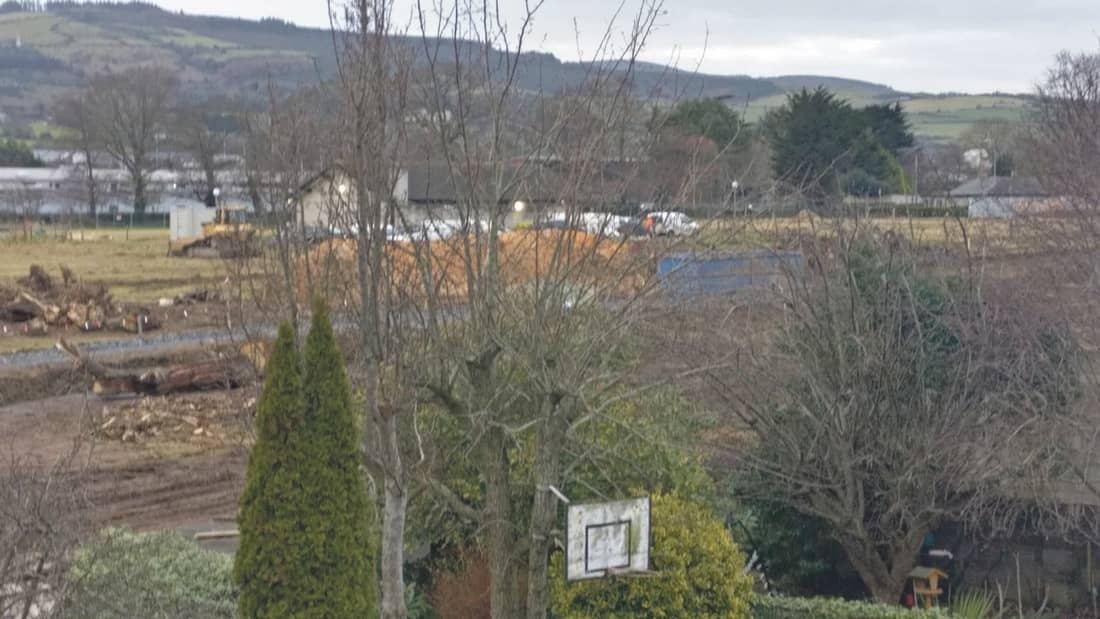 RESIDENTS adjacent to the former home of ex-Taoiseach Liam Cosgrave, on the Scholarstown Road in Knocklyon, were “disappointed” to see construction workers at the site – which has received planning permission for a 590-unit apartment development – on Monday.

All non-essential construction work had to cease when the country was put back under Level 5 restrictions earlier this month, and some residents were concerned that the workers they saw on site were breaching government guidelines.

Workers on the site of former Taoiseach Liam Cosgrave’s home

Fianna Fáil councillor for Firhouse-Bohernabreena, Deirdre O’Donovan, told The Echo: “There was disappointment locally when people saw workers at the site.

“After Christmas, the government said all construction work was to stop, with the exception of essential works, like finishing social housing developments that are near completion or working on safety issues.

“Given the number of coronavirus cases, and the new UK variant, the government quite rightly said construction work had to stop.”

Scholarstown residents were surprised to see a number of construction workers and vans at the site on Monday morning, and several claimed that some of the workers weren’t wearing masks or adhering to social distancing guidelines.

Cllr O’Donovan added: “There were workers all over the site, and many of them weren’t wearing masks or social distancing.

“There’s no building at the site, and there’s no flooding issues so, as far as residents are concerned, there doesn’t appear to be anything essential that needs to be worked on.”

Letters were sent to residents on Monday evening from Walls Construction, who were appointed to carry out work on the development, clarifying that they are connecting “a new interconnecting foul sewer line” on behalf of Irish Water, and the works have been deemed “essential infrastructure”.

A spokesperson for Ardstone Homes told The Echo: “I can confirm that the works being carried out by Walls are on behalf of Irish Water and as such are deemed essential infrastructure.

“They are installing a new interconnecting foul sewer line. We have the appropriate confirmation from Irish Water.

“Walls have procedures in place for these matters, and prior to commencing on site they informed the Residents’ Association, the gardai in Tallaght, the gardai in Rathfarnham and the Planning Department in South Dublin County Council.”

When asked about claims that workers were not wearing masks or social distancing, the spokesperson said: “Walls have confirmed that they are adhering to all CIF Covid Operating Procedures (COP’s), as well as their own policy of Antigen testing of all personnel on the site at present (currently on a weekly basis), due to the high transmission rate in the community.”

The plans for the development, which will be called Two Oaks, have been a point of contention in Knocklyon since they were first mooted by developer Ardstone Homes in 2019.

The proposal caused consternation in the community, as residents expressed concerns about the density of the development, and the impact it could have on traffic and school infrastructure in the locality.

Planning permission was granted for the development of 480 build-to-let units across eight apartment blocks, and 110 build-to-sell units to be housed in nine duplex blocks with a height of three-storeys, at the site last March.

The Scholarstown Road site was the subject of media attention in 2018 and 2019, as archaeological digs there uncovered an “early medieval enclosed settlement”, according to an archaeological assessment that was submitted to South Dublin County Council at the time.