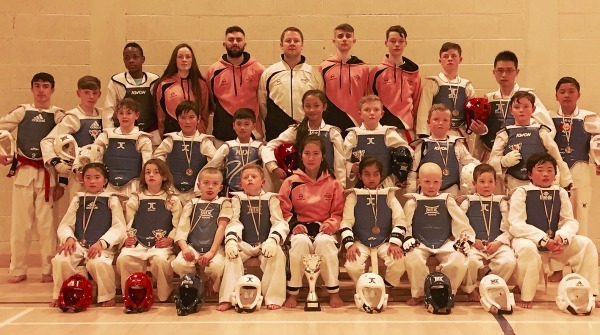 Fielding 30 athletes from grass roots to experienced level in the event that boasted more than 220 Olympic Taekwondo fighters from around the country, SDTKD have now won this title every year since capturing it for the first time in 2010.

Sabrina Burke, a newcomer to the sport, clinically won her match with high-point scoring spinning kicks to take gold.

The Nugent family saw father and sons Alan, Adam and Ben all medal in their respective divisions- the top honours going to Adam who secured gold in both his intermediate and advanced sections in Junior -55kg.

Also at the advanced end of the spectrum, David Phelan was crowned champion in his Cadet -45kg class beating his opponent with a clinical TKO and arguably the kick of the tournament.

Nasim Kourrini also secured a gold medal for the team winning his -48kg Junior section in an exciting bout that went all the way to overtime.

The event was identified by the club as a good first challenge for many beginners who went along for their first taste of competitive Taekwondo.

“The local events are so much fun for the club” said SDTKD Club Coach Robert Taaffe.

“It is great to see the first timers get their first taste of competition, and typically all of the little ones go home with smiles on their faces after the event.

“I am very happy with the team’s performance, not only the athletic performance, but the officials, helpers, fairly members and club supporters were immense on the day” he also pointed out.