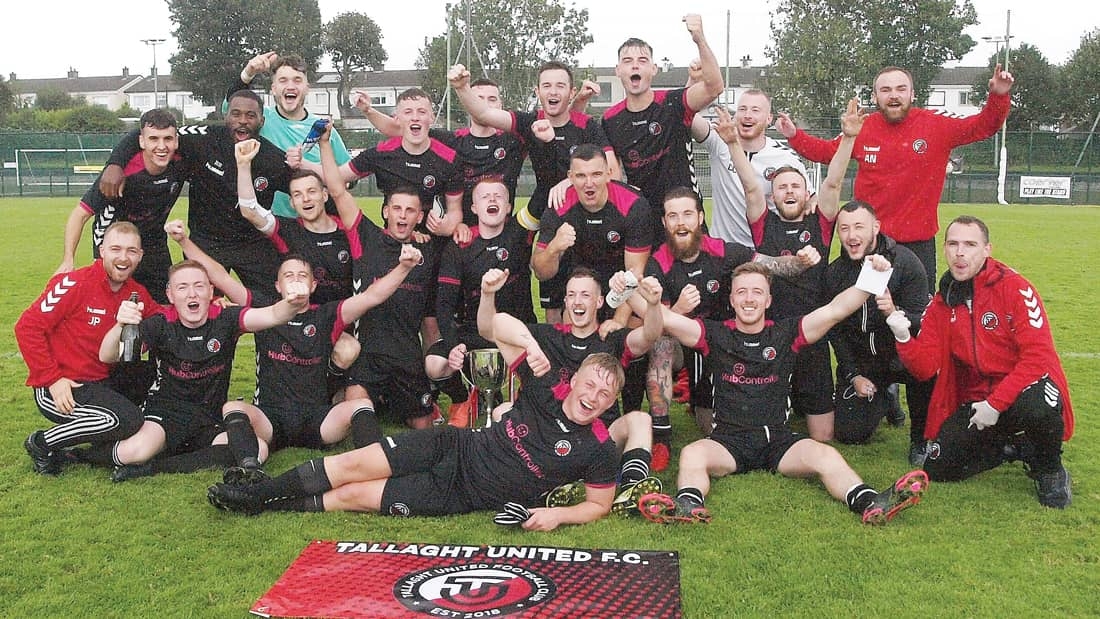 DESPITE anything the final scoreline might suggest, the UCFL Challenge Cup Final proved a highly entertaining spectacle that saw Tallaght United overcome Castle Celtic with the aid of a Liam Woods hat-trick in Home Farm on Saturday afternoon.

This game started at a frightening pace and United could have been 2-0 up in the opening 10 minutes.

Jamie McEwan was presented with an early opening, but his effort lacked the power necessary to trouble goalkeeper Dylan Cottuli.

Minutes later, Dylan Kelly ran unopposed from the halfway line, but Cottuli stood his ground to brilliantly deny him.

Castle too had their chances when Ayuba Salaudeen fired over and Liam Kennedy almost caught keeper Adam Niland out with a deep cross, before a second delivery saw Niland spill the ball, but, fortunately for him, there was no opposing player on hand to mop it up.

The breakthrough came on 30 minutes when Woods whipped in a corner from the right that saw Cottuli misjudge the flight of the ball and end up punching it into the net.

While two good chances for Castle coming up to the break should have seen them at least draw level, they were unable to capitalise.

Six minutes after the restart Celtic finally hit the target when Kennedy cut into the box on the left hand side and fired in a low cross that Conor McGreal bundled home.

But almost instantly disaster struck for them as Fionn Fitzpatrick was shown a red card for a foul on the edge of the area- his second booking of the afternoon.

The free kick from Colm Iveagh was superbly saved by Cottuli, but from the resulting corner Joe Rooney nodded home to make it 2-1.

Now Castle had to chase the game again and it seemed inevitable that Tallaght would pick them off, although, before United increased their lead, Glen O’Hara had to be at his best to clear a McGreal lob off the line.

Woods made it 3-1 after he latched on to an Eric Harmon pass and lobbed home despite Cottuli’s best effort to keep it out.

Castle refused to throw in the towel and created three good chances for Ryan Byrne, Kennedy and McGreal, but they all went abegging.

United always had that little bit more with the extra man and as the clock ticked down, they increased their lead when Woods completed his hat-trick and Carl Farrell rounded off the scoring.