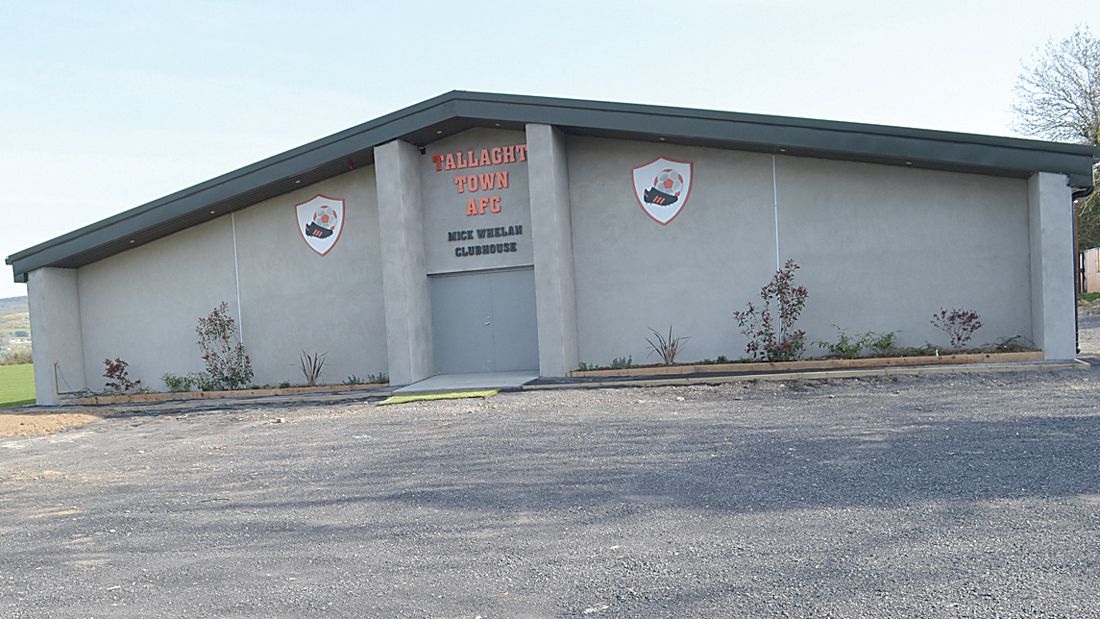 TALLAGHT Town AFC has unveiled their Mick Whelan Clubhouse, a €370,000 state-of-the-art facility named after their club secretary, who sadly passed away last year after a battle with cancer.

Receiving the building as a shell from JKS Construction last Christmas, volunteers from the club have been busy fitting the building out to bring it one step closer to use.

Located in Carolan Park, in Kiltipper, the unveiling of the facility sees the club starting the new decade on the right foot while keeping another foot very much rooted in their history.

The Town showcased the structure through a video on their Facebook, which was filmed by impending senior team management Stephen and Eric.

“When we came to Carolan Park three-and-a-half/four years ago, what we had here was basically a corn field but with the vision of the club and the committee that we have, we set a task, a bold objective in building this project,” said club chairperson Alan Merriman in the video.

“A lot of work was done behind the scenes from Conor Stevens, our club treasurer, in getting funding in place from the Sports Capital Grant and from other avenues.

“We had to get loans, we had to raise a lot of money through an I’m a Celebrity Get Me Out of Here event.”

In 2017, Tallaght Town AFC were awarded the highest grant level of €150,000 in what was a €2.8m boost into South Dublin from the government’s sport capital funding programme.

They managed to raise €35,000 through their I’m a Celebrity Get Me Out of Here! event and were eligible for a loan through Clann Credo – which all went towards the completion of the €370,000 structure.

“Mick [Whelan] was our club secretary for the guts of 25 years, without Mick we simply wouldn’t have Carolan Park.

“He was the life and soul of Tallaght Town and he brought the club to where it is now.

“Mick passed away last year, he lost his battle with cancer and we thought it fitting to name the clubhouse after Mick for the tremendous effort and work he put into the club over them years.”

Now with 335 members, Tallaght Town AFC can focus their efforts on completing the cycle for players to go from underage to senior football in their time with the club.

They have boys teams competing in the DDSL from Under 8 up to Under 17s, three girls football teams, a Football For All team for people with a disability who want to play football, and an academy section.

“We’re trying to be an inclusive part of the community that is open for everyone,” Alan told The Echo this week.

“When I took over as chairman, it was a priority of mine to complete the cycle for players to go straight through from academy to senior, so that players don’t have to leave the club once they get to Under 17.

“It was important to create a clear pathway for players to senior football.”

And it seems they are on the cusp of completing that cycle, with the club planning to enter a senior team in September after being accepted into the Leinster Senior League.

Tallaght Town AFC are now well equipped for the future with their top-class 10-acre facility at Carolan Park.