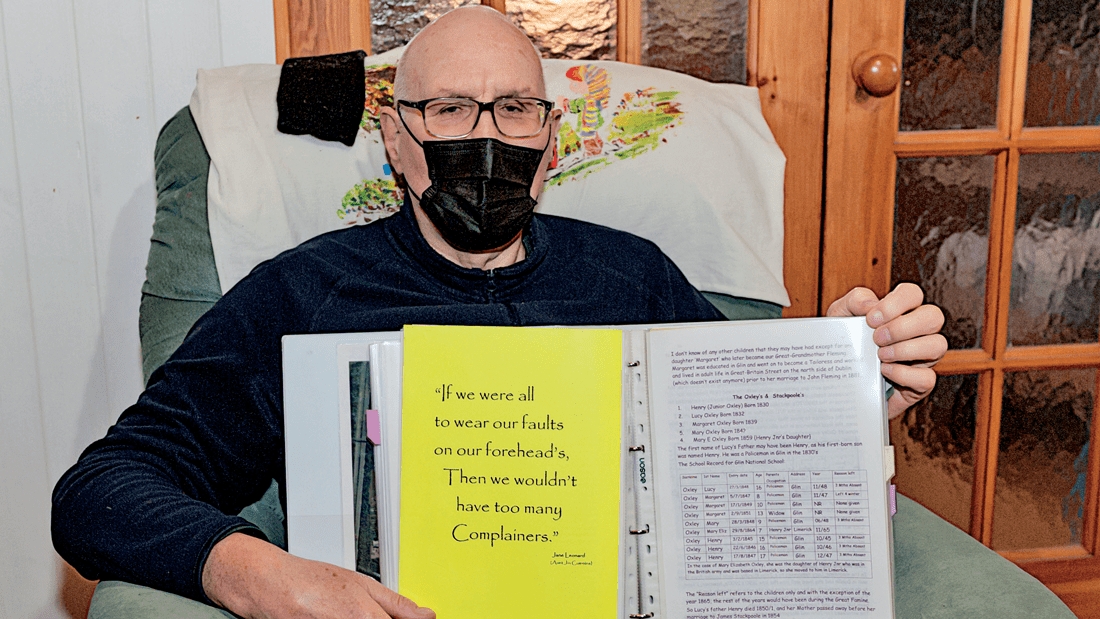 The Collectors: A treasure trove of old family photos and countless works of rich tapestry

THIS week’s collection is two for the price of one – a treasure trove of old family photographs and the almost forgotten rich craft of tapestry.

Local historian Seamus Fleming has built up quite the collection of old photographs and documents, as part of a desire to compile his family history.

During his search for old photos, Seamus also wrote a voluminous history of his family and a history of The Ranch

He complements this with a love of needlework, and has countless works of tapestry.

Many designs are sent to family and friends as presents but other pieces, such as a delightful Mother Theresa, have taken years to stitch on canvas.

A resident of The Ranch in Dublin 10, Seamus also collects historic photos from the community, which is steeped in history and recognised as a Republican stronghold for many a year.

The deeds for the First Avenue house Seamus lives in date back to 1888 and some older residents in the estate, have ancestors who were involved in important events in Irish history such as the Easter Rising and the War of Independence.

Seamus (74) has digitalised the collection to preserve it for future generations, also sharing it with Ken Larkin, from Ballyfermot Heritage Group, who has a library of historical images online for public consumption.

During his search for old photos, Seamus also wrote a voluminous history of his family and a history of The Ranch, which is classified as Ballyfermot, but located on the border of Inchicore and Ballyfermot.

“The postal and garda station is Ballyfermot, but the parish is the Oblates in Inchicore,” said Seamus.

“When Canon Troy built the Assumption Church in 1953, he brought a lot of the houses down here with him but The Ranch would not join.”

The living room is where Seamus does most of his work on the PC, and while flicking through the collection, he effortlessly recalls the lives of his ancestors, and his research dates back hundreds of years.

“There is two main families, the Leonards from Puck in Inchicore and the Flemings from the Liberties, whom I believe are Huguenots who departed France after the big Huguenot massacre in 1572.

There was an exodus to England, the USA, Ireland and Huguenot Flemings lived in Mountjoy at Love Lane. From there they branched out.

“Regardless of the information, you treat it as hearsay until you can prove it. Truth that I have is in records, birth certs, death certs.”

On one those records is an 1881 marriage cert between his great-great-grandfather Isaac Leonard Jnr and publican Agnes Walsh in the Roman Catholic Church of St James Street, which Seamus says was the parish of Inchicore at the time.

For every photo, Seamus has a story behind it, as is the case with Lucy Fleming, a grand Aunt and former member of Cumann na mBan, who had to leave Ireland between 1924 to 1930 “because she was on Michael Collins side.”

Lucy Fleming, a grand Aunt to Seamus and former member of Cumann na mBan, who had to leave Ireland between 1924 to 1930 “because she was on Michael Collins side”

Seamus first developed a love for history as a kid listening to the whispered tales from one of his old aunts Jane Cummins.

“She used to tell me all the stories. She said Lucy’s brother John Fleming came back to Ireland in 1911 and joined the Royal Dublin Fusiliers.

On the day of the Rising, he met Lucy in the local shop and she read him the riot act and told him she had to right to shoot him dead.

Twins John and Thomas Fleming (possibily or it could be one and the same person). Inset is Peter Fleming Jnr, son of Thomas. Circa 1800s

Lucy was one of three women in Dublin at the time who could drive, so she used to ferry around volunteers.

“She went to Drogheda a few years later to collect guns from a German U-boat and bring them back to Dublin, avoiding the Black and Tans.”

The family history isn’t the only colourful part of Seamus’s collection – a tour of his cosy home reveals a tapestry studio in the front room.