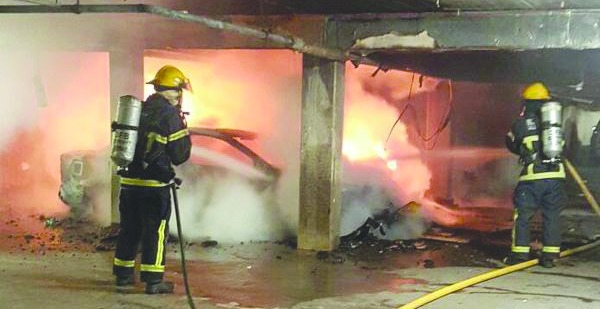 AN UNDERGROUND car park in Killinarden was engulfed by flames on Sunday, when four unoccupied cars combusted underneath the Mount Seskin Court apartment block.

Three units from fire stations in Tallaght and Dolphin’s Barn tackled the blaze, which is believed to have started in one car, and then spreading to the others.

The blaze, which created a lot of smoke in the busy residential area, is currently being investigated by Tallaght Gardaí.

A Garda spokesperson told The Echo: “Nobody was injured in the blaze which damaged four cars and all cars were unoccupied at the time.

“We are currently waiting for forensics to come back, but we will be investigating the fire to see if the blaze was deliberate and if this is a case of criminal damage.

“There was also an ESB box nearby, so we need to make sure that there was no fault with that.”
ESB were called to the scene by Dublin Fire Brigade.

Anybody who noticed anything out of the ordinary in the area on Sunday, October 4, is encouraged to contact Tallaght Garda Station on 6666000.