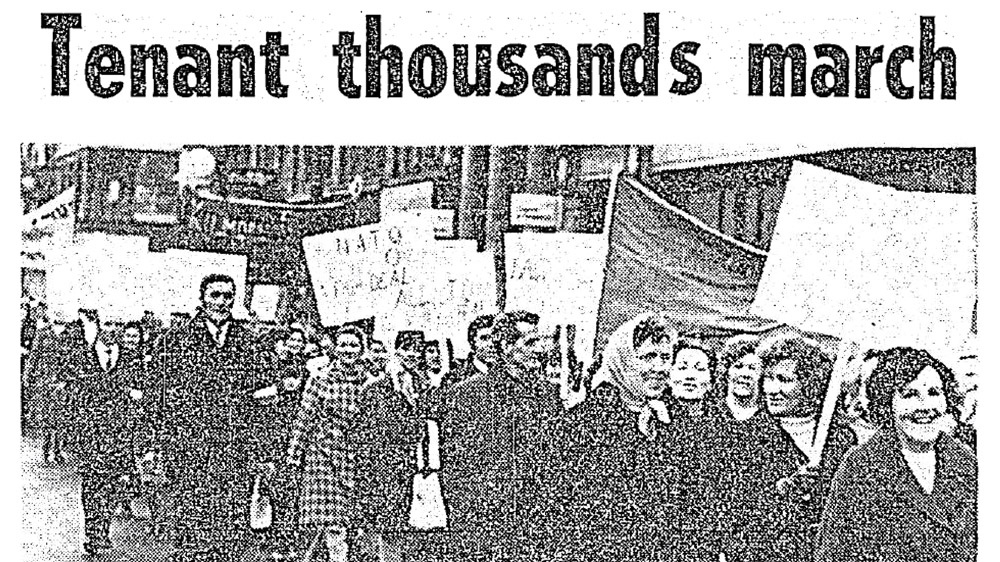 A protest march by tenants’ associations in Dublin on April 1970 to mark the beginning of the rent strike in areas across Dublin, including Ballyfermot.

Were you involved in the tenant rent strikes in the 1970s?

THIS year marks the 50th anniversary of council tenant rent strikes in Ireland, including a prominent campaign that took place in Ballyfermot.

Rent strikes in the early 1970s became a huge social movement, beginning in Ballymun and Cork, and spreading throughout the country.

Tens of thousands of tenants refused to pay rent in protest against poor quality council housing, a lack of community facilities and the threat of massive rent increases.

The Ballyfermot Community Association was reportedly the largest tenants’ and community association in Ireland in 1970, with up to 40,000 members.

Researchers want to speak to anyone who was involved at the time for a new project to uncover the forgotten history of local authority rent strikes.

The project was recently launched by the Community Action Tenants Union Ireland (CATU) in collaboration with researchers from Maynooth University.

“The 40,000 figure does refer to membership of the Ballyfermot Community Association. It comes from an article in the Evening Herald (October 20, 1970) which says that the association represents about 40,000 people,” said Dr Fiadh Tubridy, Irish Research Council Postdoctoral Fellow, Maynooth University Department of Geography.

“There was a rent strike in Ballyfermot from May 1972 to August 1973. Our project is highlighting that it is currently the 50th anniversary of the beginning of the rent strike across Dublin, including in Ballyfermot.”

According to an Evening Herald report in March 1972, BCA voted to begin a rent strike along with other tenants associations which were affiliated to the National Association of Tenants Organisations (NATO).

“The immediate spark was a 4p increase per room for council tenants on fixed rents,” said Dr Tubridy.

With NATO on board, the BCA has decided to “go the whole hog” and fight for a number of outstanding issues they felt should have been resolved years ago. 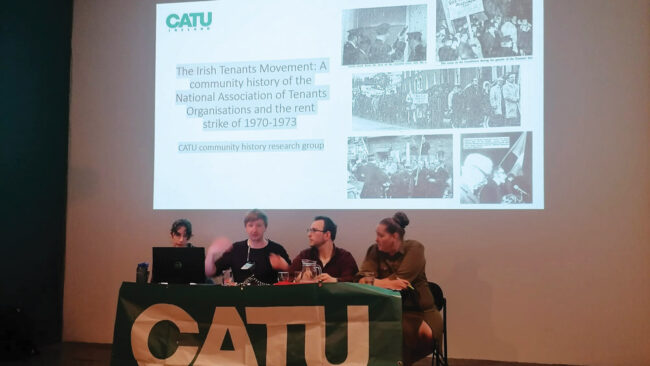 PROJECT: A photo from the CATU launch in the Project Arts Centre

Dr Tubridy, a CATU member and researcher, continued: “Now the demand is for a complete new system of rent, that rent should be assessed on the earnings of the tenant and not of his whole family, that when a tenant dies the tenancy continues in the family without changing to a higher-scale rent as at present, that the specified amount of money for maintenance of houses be increased.

“In terms of the level of support, an article in the Evening Herald, also in June 1972, reported concern that ‘only’ 25 per cent of tenants were withholding their rents, but this would still have been a very large number of people.

“There are various reports of eviction notices being issued to those on rent strike but no evidence of evictions being carried out. The rent strikes in Ballyfermot and other areas around the country ended when a deal was negotiated between the government and NATO in August 1973, with the result being a three-year rent freeze, a new system of rent assessment, more favourable terms of tenants buying their homes and recognition of NATO as the legal representative of council tenants.”

Researchers are also looking for tenants who were living in St Michaels Estate and in Crumlin and Drimnagh at the time.

CATU is looking for people to contribute to this project by taking part in an interview about their experiences.

If you were involved in the rent strikes or have information about them, you can get in touch by email at catunato@gmail.com or by phone on 087 7197874.

You can also find more information about the project HERE.