The junction on Katharine Tynan Road at the Kingswood Luas

THE junction at the pedestrian crossing adjacent to the Kingswood Luas stop has been described as “lethal”, after a teenager was knocked down and there was a separate collision between a car and a van four days later.

The crossing is a busy throughway for children attending Kingswood Community College and St Kilian’s National School, and also commuters using the Luas.

On Friday evening (November 4), 13-year-old Luke Mullen was hit by a car which the Kingswood Community College student said didn’t have its lights on.

Luke’s dad, Karl Mullen, told The Echo: “He was going from Kingswood heading towards Kilnamanagh.

“There was traffic coming down the M50 side but no traffic coming towards Belgard. He looked down, saw no cars, walked across, and got a smack of a car. He said he didn’t see any lights on it.

“He got knocked off the road and back onto the pathway.

“The woman who was driving the car stopped, but my son was in shock. He said he was okay, and then she drove off.”

Luke got an X-ray in Tallaght University Hospital on Tuesday, as his parents are qualified first aiders and were looking after him at home after the accident, but his pain wasn’t subsiding.

While the doctor didn’t see any broken bones, they said they would seek a second opinion.

In the meantime, Luke experiences pain when standing continuously and is wearing an ankle support boot.

The incident has been reported to gardai.

Commenting on the junction, Karl said: “It’s an absolute nightmare. My wife would walk to Dunnes with the kids, but the last thing we want to do is use a junction where it’s like Russian roulette.

“If you look at that road, there’s no speed control or ramps. They can tear up and down that road when there’s no traffic, it’s very dangerous.

“Ramps would be ideal. At the moment, it’s like a free-for-all. It’s unbelievable.”

On Tuesday morning (November 8), Echo news editor William O’Connor witnessed a collision between a van and a car at the junction, at a time when many children were waiting to cross on their way to school. 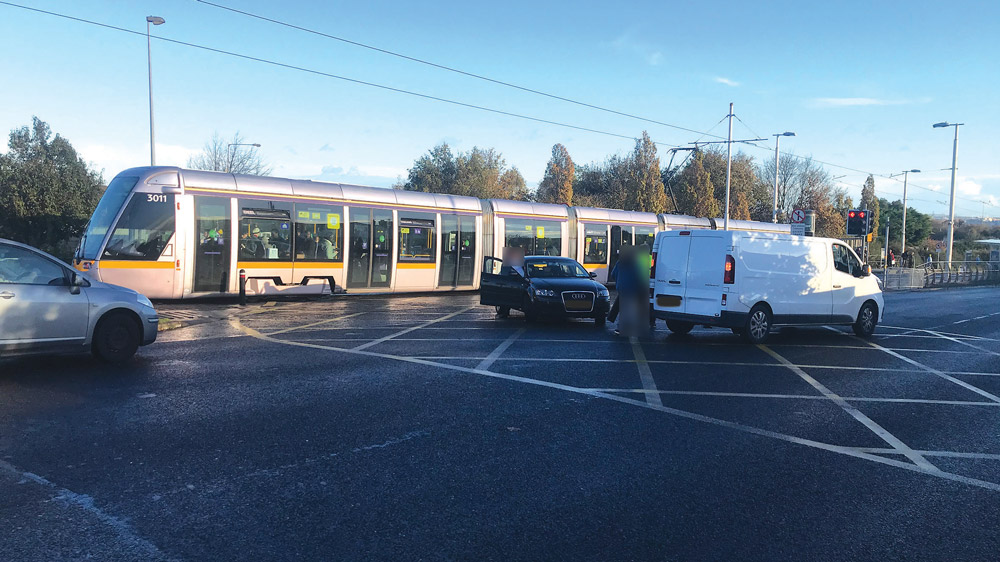 The collision between a car and van on Tuesday morning, November 8 (Image: Will O’Connor)

Independent councillor for Tallaght Central, Mick Duff, told The Echo: “It’s not the first time that issues like these have occurred – it’s an extremely dangerous junction, but a very busy one.

“It’s a lethal junction. There’s been car crashes there, and a child was knocked down on Saturday.

“I think that, at this particular point in time, we cannot wait for a fatality to happen before we address this.

“Whether it’s adjusting the speed limit or traffic calming measures…there has to be confidence for parents who are sending their kids off to school, not knowing if they can cross that road safely.

“We need something that’ll give us a better system of safe crossing at the junction. I don’t think that crossing has been upgraded since the Luas started running.

“We do need it to be upgraded, and motorists have to be completely and totally aware that they’re coming up to a junction where people and children are crossing the road.”

The issue will be raised at a council traffic management meeting later this month by several councillors, including Cllr Duff.

Issues at the junction have been featured on council meeting agendas before, going back several years, and Cllr Duff is hopeful that a solution will finally be found.

“It’s something that we, as councillors, are aware of,” he said. “We want to reassure the residents of Kingswood and Kilnamanagh that we are taking this issue seriously.

“Hopefully we will get a safe solution that will suit everyone.”

The Echo contacted South Dublin County Council and asked if it had any plans to introduce traffic calming measures at the junction, but a response wasn’t received at the time of going to print.