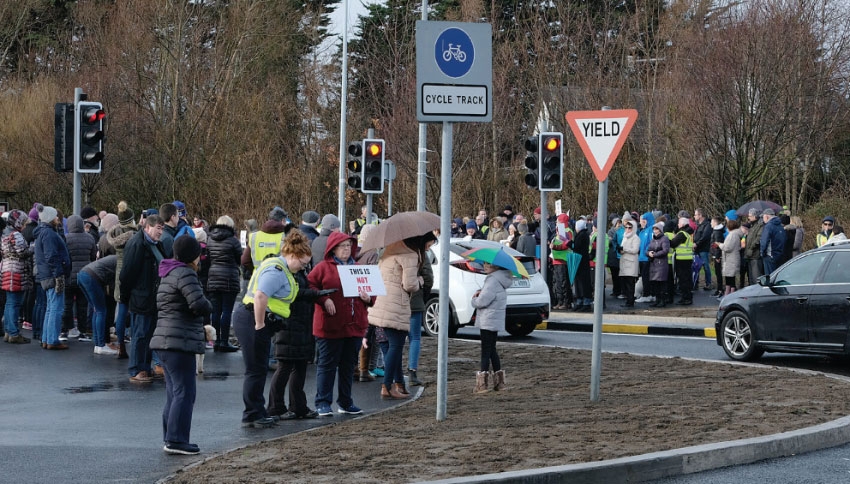 OVER 250 protesters went to Orlagh roundabout in Knocklyon last Saturday (January 26), calling on South Dublin County Council to fix the roundabout, as residents say that works carried out at the roundabout have led to lengthy traffic tailbacks in the area.

As previously reported in The Echo, construction work began on the installation of a shared cycle and pedestrian way leading to the roundabout in July, where traffic was then reduced to a single lane on approach to the roundabout, which it is believed is now leading to traffic tailbacks.

People protesting at the Orlagh roundabout

Independent councillor for Rathfarnham, Deirdre O’Donovan, set up a petition in December that at the time of print had amassed over 4,300 signatures, calling on South Dublin County Council to reinstate the previous layout of the roundabout.

Knocklyon resident Declan Brady organised the protest so that members of the community could voice their frustrations about the traffic tailbacks that have plagued the area since work began.

“It was great to have such a big show of solidarity from the local community, who turned out in their droves to show support despite the rain.

“Myself, Cllr Deirdre O’Donovan (IND) and Cllr Brian Lawlor (FG) made speeches, and John Lahart TD (FF) and other local politicians were in attendance.

“We got some major support from passing motorists who were stuck in the usual tailbacks.

“Hopefully South Dublin Country Council will start listening to us now after this show of togetherness from those impacted, and fix the roundabout!”

Mr Brady added that a follow-up protest will be held in front of South Dublin County Council’s offices at County Hall, Tallaght, on February 12.

A spokesperson for South Dublin County Council said: “On full completion of the works, the operation of the roundabout will be monitored over a period of time, as is standard with any new infrastructure.

“Any issues arising will be examined.”