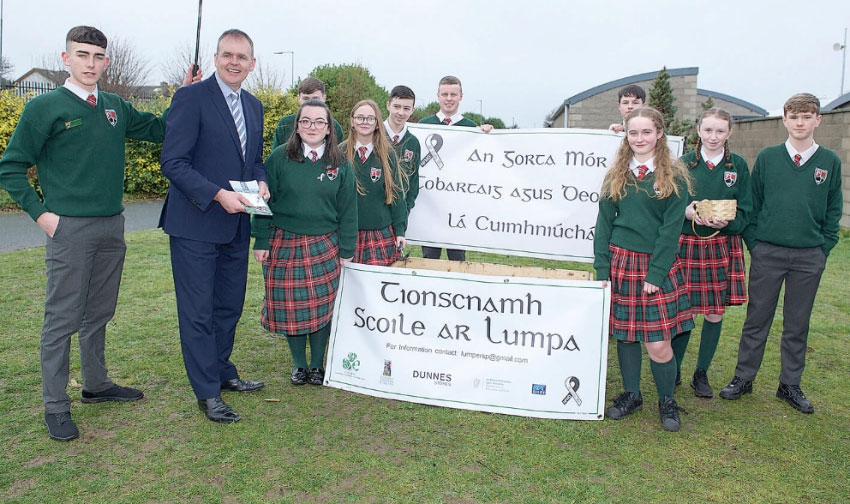 THE MINISTER for Education and Skills, Joe McHugh TD, visited Coláiste de hÍde in Tallaght on Thursday, January 24, to celebrate the 25th anniversary of the Irish school’s opening by planting a tree on the school grounds and unveiling a commemorative plaque.

Coláiste de hÍde first opened its doors in a temporary building in Tallaght Village in 1993, to act as a feeder school for the all-Irish primary schools that were in the area, and in 2001 the school moved into a brand-new purpose-built school building at its current location in Tymon Park.

Minister McHugh planted a tree on school grounds, and also lumper potatoes in the school garden to support the Tallaght Famine Committee’s Lá Cuimhniúcháin and the school’s Lumper Project.

Current and former staff and students attended the event, as did the CEO of the Dublin Dún Laoghaire Education and Training Board, Paddy Lavelle, the students’ parents and the parish priests from St Aengus’ parish.

Minister McHugh was shown a number of the students’ mini companies, and a concert was organised for his visit by Coláiste de hÍde’s music students.

A speech was then given by the Minister, after which he presented specially engraved clocks on behalf of the school to former principals Cáitlín Mhic Shiachais and Feargal Ó Giolláin, and former deputy principals, Declan Mac Glynn, Ann-Marie Ni Dhomhnaill and Daithí Ó Murchú.

Proinnsias Ó hAilín was also recognised for his contribution to the School Board of Management.

Minister McHugh expressed his thanks for the gifts and congratulated the school on reaching such a significant milestone, and wished them continued success in the future in providing education through the medium of Irish for the people of Tallaght and West Dublin.

Principal Mac An Bhaird thanked the Minister for visiting Coláiste de hÍde, and highlighted the support and co-operation over the years from the principals, teachers, parents and students from Gaelscoileanna in the Tallaght area, Scoil Santain and Scoil Cáitlín Maude.