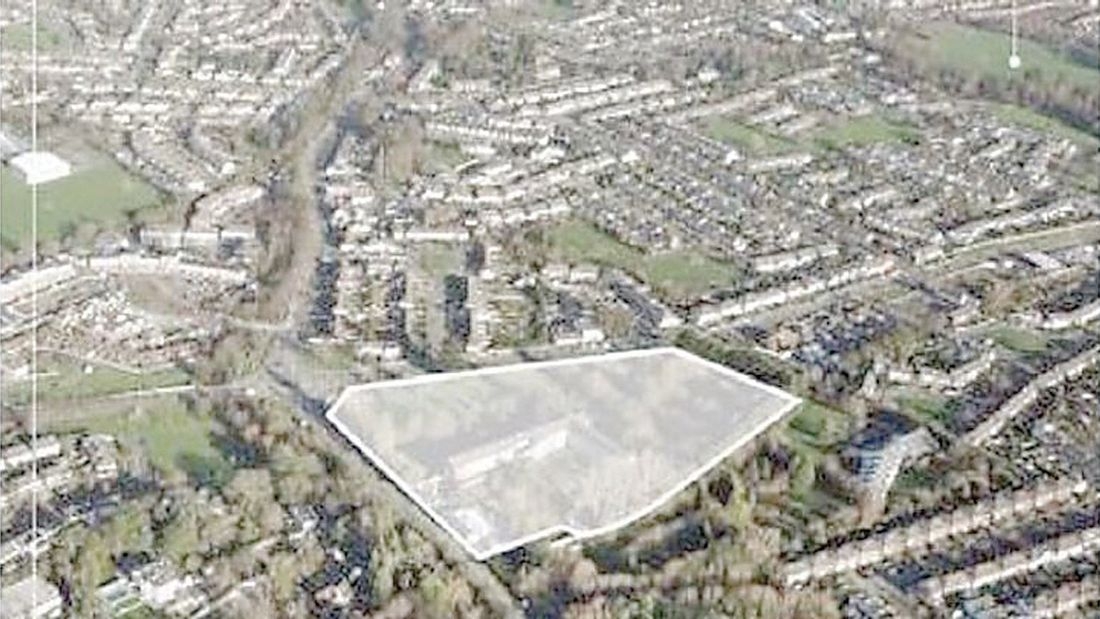 OVER 300 Ballyboden residents have joined together to submit a joint objection to plans for a 496-unit apartment development at the former site of the Augustinian Order on Taylor’s Lane.

As previously reported in The Echo, developer Shannon Homes lodged plans for the development with An Bord Pleanála under the fast-track planning system in May, and the units are to be housed across three apartment blocks, ranging from two- to seven-storeys in height.

An aerial view of the Augustnian Order on Taylor’s Lane

The plans have caused consternation in the local community, and the Ballyboden Tidy Towns group has spearheaded a joint objection to the plans, which has the signatures and input of over 300 objectors.

The Augustinian site was previously home to a number of amenities for the community, including a pitch and putt club, St Joseph’s Youth Club, and basketball and tennis courts, but these facilities were closed several years ago.

Angela O’Donoghue, the chairperson of Ballyboden Tidy Towns and a member of the Glendoher and District Residents’ Association, told The Echo: “The Augustinians had agreed that there would be a return to amenities at the site.

“It’s as if people in Ballyboden don’t deserve a youth club or a boxing club. People feel disgusted about it.

“We feel shafted by the Augustinians and abandoned by the council, and now it’s like the developer is airbrushing us out like we don’t matter.”

The Augustinians sold the 8.6-acre site to Shannon Homes for a reported €20m last year.

Another point of contention for the objectors includes concerns that the developer’s plans will contravene the Ballyboden Village Plan which was published by South Dublin County Council in 2006.

In the Ballyboden Village Plan 2006, the council stated that “major developers will be encouraged to provide community services in conjunction with commercial and residential development.”

Provision for a new public park along Taylor’s Lane is also included in Shannon Homes’ plans.

Ms O’Donoghue said: “People are really sore about this, and because of Covid we couldn’t have a public meeting so we put up a fundraising page online.

“We had an expectation that the plans from 2006 would be maintained, but instead we’ve gotten a slap-dash, ‘build as many units as we can development.”

Another concern is the provision for 10 per cent of the development being ringfenced for social housing, and the fact that the requirement for it to be social housing will lapse after 20 years.

“I’ve always demanded that 20 per cent of developments should be for social housing,” added Ms O’Donoghue. “Housing stock from the council doesn’t seem to go up in the area, and the [private] developments that do are almost always two-bed – never three- or four-bed.

“Everybody’s being short-changed in this development – both the new residents and the existing community.”

“There is an appetite in the community to make sure this development does not go ahead,” explained Ms O’Donoghue. “We’re going to fight it all the way.”

A South Dublin County Council spokesperson said: “A SHD planning application has been submitted to An Bord Pleanala (ABP) for determination.

“As part of this process, the council are currently assessing the application against all relevant planning policy and this report will be issued to ABP by 20 July and will be made available to the public after that time.”

A decision on Shannon Homes’ application for planning permission for the apartment development is due from An Bord Pleanála by September 17.