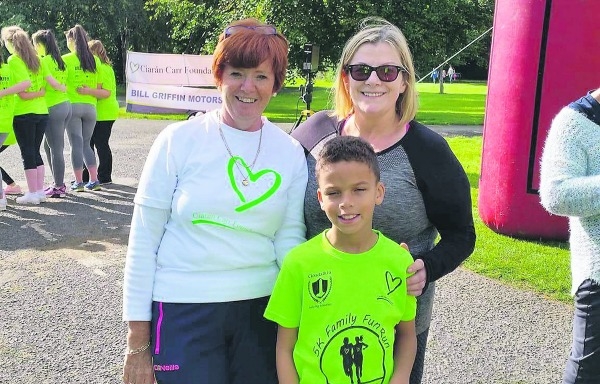 A giant step for Zaki after life-changing op

ANOTHER giant step for young Clondalkin boy Zaki Djellabi (10), who in the space of just over four months, has gone from completing life-changing surgery in the USA, to competing in the Ciaran Carr 5k race in Corkagh Park.

The community rallied to support the youngster with cerebral palsy and his family, raising €80,000 for his surgery in St Louis last May.

Zaki’s parents Carmel Tuite and Zoubir Djellabi, kick-started a fundraising campaign 18 months ago, after he was accepted for Selective Dorsal Rhizotomy [SDR] in Missouri.

The ‘Let’s Do It For Zaki’ campaign was well supported by people in Clondalkin, Tallaght, and through online donations.

Last week, Lucan firm Nostra IT presented a cheque of €20,000 for Zaki’s rehabilitation, and there was also support from Marks & Spencers, and Kevin and Barry O’Loughlin, who ran a dusk-to-dawn event for Zaki.

“He wanted to compete in the Ciaran Carr race, and he did it very well,” said proud mother Carmel.

“The surgery was successful, and has made such a difference to the entire family. There is less pressure, he can go out on longer trips now. It has been huge for his confidence, and his stamina and balance have improved.”

Carmel continued: “He may have to go back for corrective eye surgery, but we hope to get that done here. The outlook is a much more mobile life. There is not much strain on his muscles and tendons. That’s all eliminated.”

Zaki underwent intensive surgery and rehabilitation in the USA, and returned with his mother in mid-June.

Lately, he has started ju-jitsu in Inchicore with fitness instructor Mark Lacey, who also works with other kids with disabilities.

“Mark is great with him, and he loves it,” said Carmel.

“The HSE has not been as proactive providing physio, thank God we’ve enough right now.

“We want to thank everyone for helping us out. The community have been a big help.”