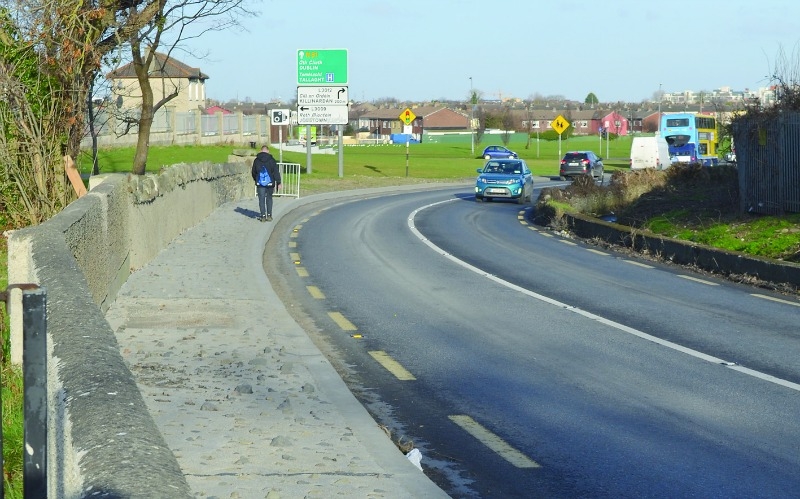 SOUTH Dublin County Council has introduced barriers at the ‘path that’s not a path’ on the Blessington Road to prevent people from walking on it.

In early December, people were left confused over the introduction of what looked like a path along a stretch of the N81 between the Jobstown House and the entrance to DeSelby estate.

What caught the attention of passersby was the presence of stones in the cement, which the council told The Echo is to prevent people from walking on the feature, or ‘rubbing strip’.

The feature was discussed in council chambers this week in response to a motion by Tallaght South Sinn Féin councillor Dermot Richardson.

According to the council: “Following on from remedial works carried out to the boundary wall of Kiltalown Park, it was decided to remove the existing concrete crash barrier along the N81.

“This was done as a safety measure to provide cyclists with a refuge area should they have any mechanical issues along this stretch of road.”

The council added: “A ‘rubbing strip’ was constructed to protect the wall [which has historic significance] from errant vehicles.

“These works are not a footpath and to highlight this, rounded stones have been embedded into the concrete to remove a walking platform.”

The council told The Echo that barriers are now in place at each end of the concrete strip restricting access for pedestrians and directing them to the footpath in Kiltalown Park.

Signage instructing people not to walk on the strip will also be erected.

Tallaght South Sinn Féin councillor Dermot Richardson told The Echo: “All of this work to prevent people from walking on this stretch of concrete should have been put in place when the path was put in.

“People have been walking on it and the whole thing has turned into a bit of a joke.

“Like other councillors, I have been getting stick from residents over the design of this path that’s not a path.

“It was done wrong and the design does not work . . . no matter what upgrades are made, it looks like a path.

“It has added confusion to a busy road, and has confused both residents and councillors.”

Labour Party councillor Martina Genockey told The Echo: “I think local councillors should have been informed of [the details of the new feature] so that we could have spoken with residents and received some feedback on it.”