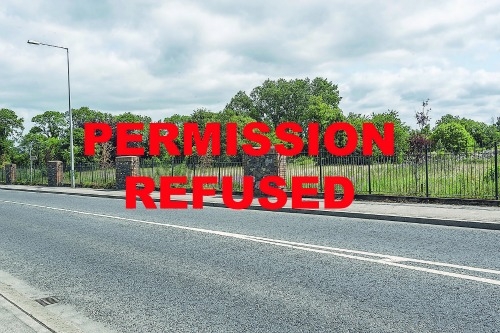 A PROPOSED housing development on a site in Finnstown has been refused permission by An Bord Pleanala after being met with strong opposition by local residents and politicians.

The development, which was proposed by housing developers Greg Kavanagh and Patrick Crean through Crekav Landbank Investments Ltd, was initally granted a split decision by South Dublin County Council.

In the original application, the applicant sought to develop 74 units on the site – permission was granted for 58 units, with permission refused for 16 of the units.

A tree protection order was placed on nine trees on the site following a vote by members of South Dublin County Council, prompting the refusal of the 16 units and a re-design of the development.

In the appeals, concerns were raised about the lack of consultation with residents on the revision of the design, the proposed removal of the hedgerow on the site and the impact it would have throughout the area, the impact the development would have on traffic and the permeability of the site for pedestrians and cyclists.

As part of its final report, An Bord Pleanala said: “Having regard to the lack of an appropriate mix of house types and sizes, to the lack of permeability for pedestrians and cyclists, the poor quality of the residential layout and design which is in conflict with the Design Manual for Urban Roads and Streets and the Guidelines for Planning Authorities on Sustainable Residential Development in Urban Areas issued by the Department of the Environment, Heritage and Local Government in May, 2009, it is considered that the proposed development would seriously injure the residential amenities of the area and the residential amenities of future occupants and would, therefore, not be in accordance with the proper planning and sustainable development of the area.”

The decision to refuse permission for the development was granted by An Bord Pleanala on January 4.